Floyd County, Kentucky – A horrific act of cruelty, claiming more than15 innocent lives, recently took place in Floyd County, Kentucky. On Tuesday, December 16, over a dozen deceased horses were discovered near a strip mining site – all of the horses appear to have been shot to death with a low-caliber rifle.

The purpose of this petition is to raise awareness of this despicable crime so that those who were involved will be found and charged. When the cruel individual(s) is found, we will fight for significant punishment. 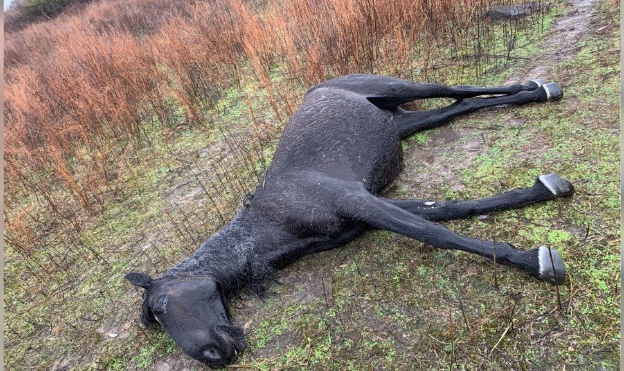 Some of the horses slaughtered in eastern Kentucky were just a year of age…others were pregnant. Floyd County Sheriff John Hunt told WYMT News, “This is very inhumane, and it’s a very cruel act of somebody who just apparently had nothing else to do or whatever, just to go back on a strip job and shoot down horses who were, one of them obviously was feeding, had grass in its mouth.”

One of the yearlings was shot in the face – there is evidence that the horses scattered when the gunshots began and they were cruelly stalked, hunted, and killed. People from around the nation are horrified by this senseless act of cruelty and donations are still being made to increase the reward to find the person(s) involved.

Whoever is behind this sick crime must be found and punished. Anyone who has information is asked contact the Floyd County Sheriff’s Office at 606-886-6171.

Update 12/23/19: Six more deceased horses have been found! The Floyd County Sheriff has described the scene as looking like a “batttlefield.” The reward has grown to $20,000 to find whoever is behind this deplorable crime.

Update 12/30/19: Two horses, from the herd which was slaughtered, have been found alive. A “heavily pregnant” mare and her colt are being cared for at the Kentucky Humane Society’s Willow Hope Farm in Simpsonville, KY. The mare who miraculously survived the horse slaughter showed signs of “stress and anxiety” after being rescued. Dumas Rescue believes that there may be more survivors in the area and are working to locate them.