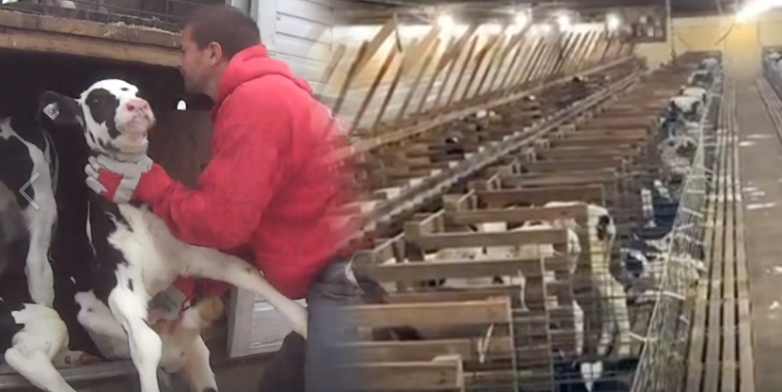 VIEW THE SIGNATURES OF 14,867 PEOPLE WHO HAVE ALREADY SIGNED THIS PETITION

An investigation by the Animal Recovery Mission has uncovered horrific cruelty towards calves at Fair Oaks Farm, a company which boasts “best in class animal care.” Video taken during the undercover investigation showed calves being punched, kicked, stabbed and burned. Is it not bad enough that animals are bred to be killed…must they be tortured from nearly their first breath?

McCloskey, has expressed dismay and disgust about the cruelty happening at the Fair Oaks Farm facility and he has stated that the employees involved in the abuse are no longer working for the company. Is that enough? Fair Oaks Farm products are being pulled off of many retail store shelves, which will impact the company’s bottom line. But abuse, severe abuse, took place and justice must be served.

Join us in asking the Newton County Sheriff’s Office to investigate and charge everyone involved in these cruel situations. Until that time, the so-called “Disneyland of dairy” should be boycotted.

We are saddened to report that the felony animal cruelty charge against Edgar Gardozo-Vasquez, a former Fairlife Farm employee, has been dropped and he has been sentenced to one year of probation. The prosecutor stated, “I don’t know that he mutilated or tortured an invertebrate animal, based on the video that I saw. I’m satisfied by the plea, and I’ll stand by it.”

At this point in time, with the lack accountability for the animal cruelty from a legal standpoint, the only recourse against this business is a boycott of their products. We will continue to circulate the petition to raise awareness about the cruelty that was inflicted on the innocent calves at Fair Oaks Farm, and to keep up pressure on the farm owners to prevent this despicable behavior from happening again.

A California consumer has filed a lawsuit alleging that Fairlife dairy products have been misrepresented to consumers as being sourced from humane farming conditions. According to Legal Newsline, Marleny Olivo, “individually and on behalf of all others similarly situated, filed a complaint on Sept. 25 in the U.S. District Court for the Central District of California against The Coca-Cola Co. and FairLife LLC alleging violation of the California Consumer Legal Remedies Act, the Unfair Competition Law, False Advertising Law, breach of express warranty, breach of implied warranty, common law fraud, negligent misrepresentation and unjust enrichment.“https://legalnewsline.com/stories/514136058-class-action-filed-over-fairlife-s-treatment-of-cows

Fair Oaks Farms has published this link on their website, https://fofarms.com/progress/#timeline, introducing a wealth of new safety measures and professionals they have implemented and hired to demonstrate their commitment to their welfare to animals.

Animal Victory commends Fair Oaks Farms for the changes.  We also commend Marleny Olivo for the false advertising lawsuit and we look forward to seeing the court’s response to the suit.

Finally, Animal Victory is asking Fair Oaks Farm and the Newton County prosecutor’s office and Sheriff’s office for an update on the criminal investigation.

Sheriff Tom VanVleet has commended all of us for our efforts. He told us Arrest warrants were issued for those involved and one of them was arrested and that they are still attempting to locate the others.

Your voices are being heard! Fair Oaks Farms has reacted to the public outcry and taken steps to improve safety for the cows in its care. The company began installing surveillance cameras in June and by July, the installation was reported to be “100 percent complete.” Fair Oaks Farms has also hired an animal welfare expert to oversee animal care operations, and contracted with an independent auditor (Food Safety Net Services) which will perform random and unannounced audits every two to four weeks. You can see all of the safety measures Fair Oaks Farms has put into place at this link.

Read our Letter to the Sheriff here

We would like to believe that Fair Oaks Farms is committed to the welfare of the cows and calves in their care, but we are not 100 percent convinced given the epic failure which was revealed in the damning undercover video. We will continue this petition until we are certain that this company knows that the public cares, and until we see that humane animal welfare practices are in place and adhered to.  We have asked Fair Oaks for the courtesy of a reply to update our supporters.

Edgar Gardozo-Vasquez, one of the men identified as an abuser of calves at a Fair Oaks Farm, has been turned over to U.S. Immigration and Customs Enforcement custody. Gardozo-Vasquesz, a Mexican national, will remain the custody of ICE pending the outcome of accusations that he is in the United States illegally.

One suspect has been arrested! Edgar Gardozo-Vasquez, 36, of Brook, Indiana, has been taken into custody. There are outstanding warrants for the other two suspects.

Three men are now facing charges for these atrocious acts of cruelty. Prosecutors have charged 31-year-old Santiago Ruvalcaba Contreros, 36-year-old Edgar Gardozo Vazquez and 38-year-old Miguel Angel Navarro Serrano with misdemeanor beating of a vertebrate animal and arrest warrants have been issued. Your voices are being heard! We must push for these men to be punished to the full extent of the law.

We use cookies on our website to give you the most relevant experience by remembering your preferences and repeat visits. By clicking “Accept All”, you consent to the use of ALL the cookies. However, you may visit "Cookie Settings" to provide a controlled consent.
Cookie SettingsAccept All
Manage consent