China – The world is outraged over a cruel publicity stunt played out last weekend at a Chinese theme park. On Saturday, the Meixin Red Wine Town theme park hoisted a live pig high into the air and forced it to bungee jump from a 223 feet tower.

The terrified pig, whose legs were tightly bound in rope, could be heard squealing as it was bounced up and down at the end of the bungee. By the time the ordeal ended, the pig was silent and motionless.

Join us in asking for a boycott of this theme park – their publicity stunt was cruel, inhumane and completely unnecessary!

(Watch the video at this link)

READ OUR LETTER TO TRIP.COM

Pushing a live pig from a tower, hundreds of feet in the air, is the height of cruelty. Not only was the pig terrified, but it was likely injured by the unnecessary spectacle. The Meixin Red Wine Town theme park has since apologized for their incredible lack of judgement – the apology came after thousands of people voiced their outrage over the disgustingly cruel stunt. 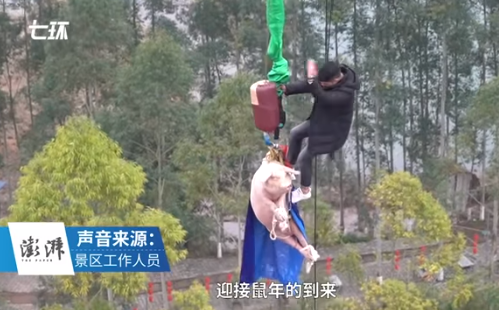 It has been reported that the exploited pig was taken to be slaughtered after the heartless publicity stunt.

Theme parks will not exist if nobody visits them – we are asking for a boycott of the Meixin Red Wine Town theme park. Please add your name to the petition and show this business that there are repercussions for abhorrent behavior!