A terrified dog, tethered to a chain and trapped beneath a collapsed shed, was rescued on September 1. The Louisiana SPCA posted photos of the trapped dog, and recounted the situation, and rescue effort. 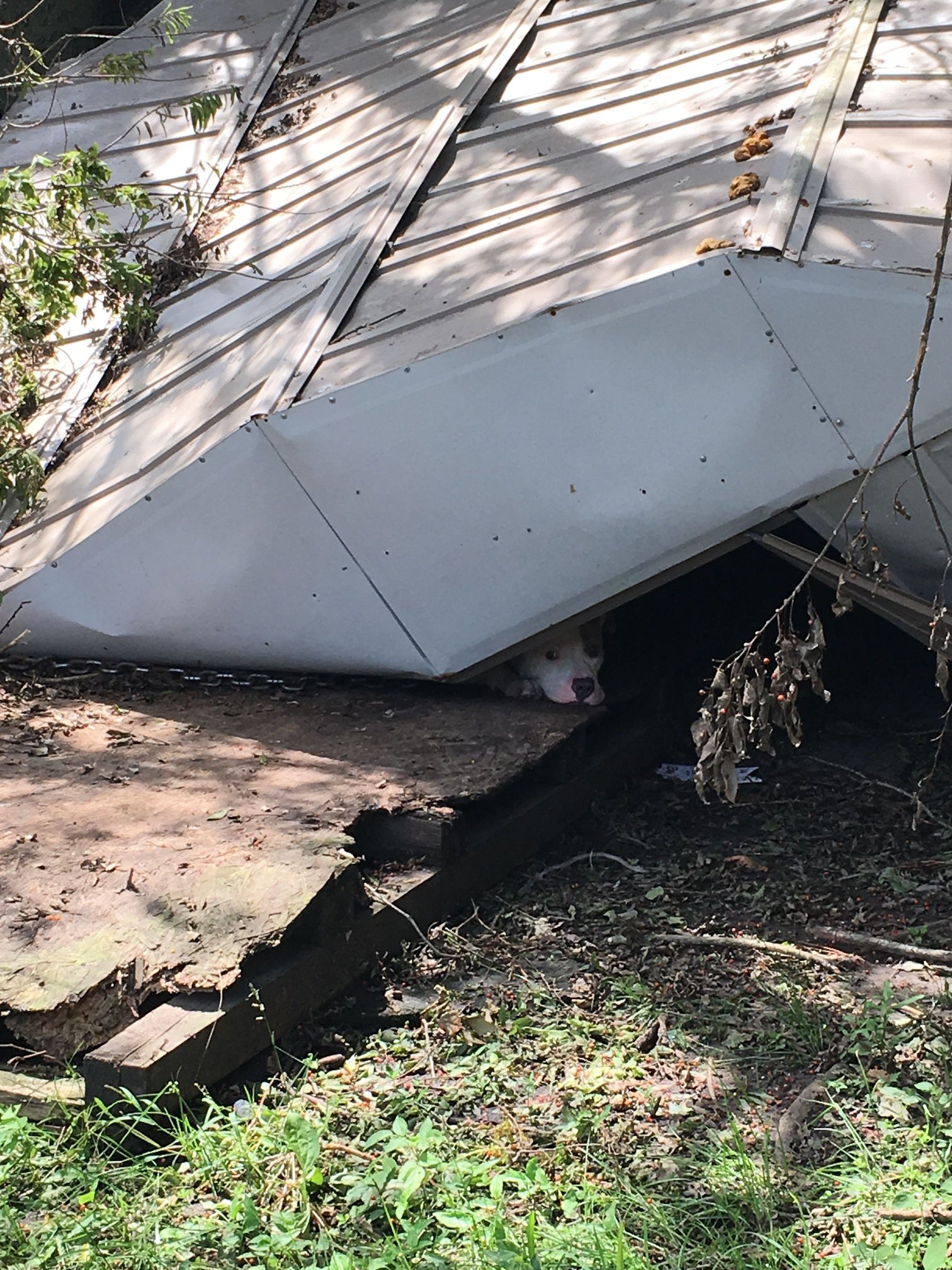 Yesterday our team and Humane Rescue Alliance officers who volunteered to help here after Hurricane Ida were able to make an amazing rescue! While we were out in the field responding to calls of abandoned animals a resident flagged us down and led us to a dog trapped underneath a collapsed shed!
Our teams rushed to the scene, where they found a scared dog chained inside of the shed and tangled under the debris.

We carefully lifted the shed enough so we could guide the dog out from underneath and free him from the chain. Thankfully, and perhaps miraculously, the dog was not injured.

The neighbor, who alerted the rescuers to the dog’s presence, helped name the dog Bubbles. Once freed, the pup was extremely affectionate. The animal welfare agency said:

Bubbles was super friendly and sweet and became almost immediately affectionate toward his rescuers. Bubbles was transported to our shelter in Algiers to cool off and recover while we work to locate his owners. 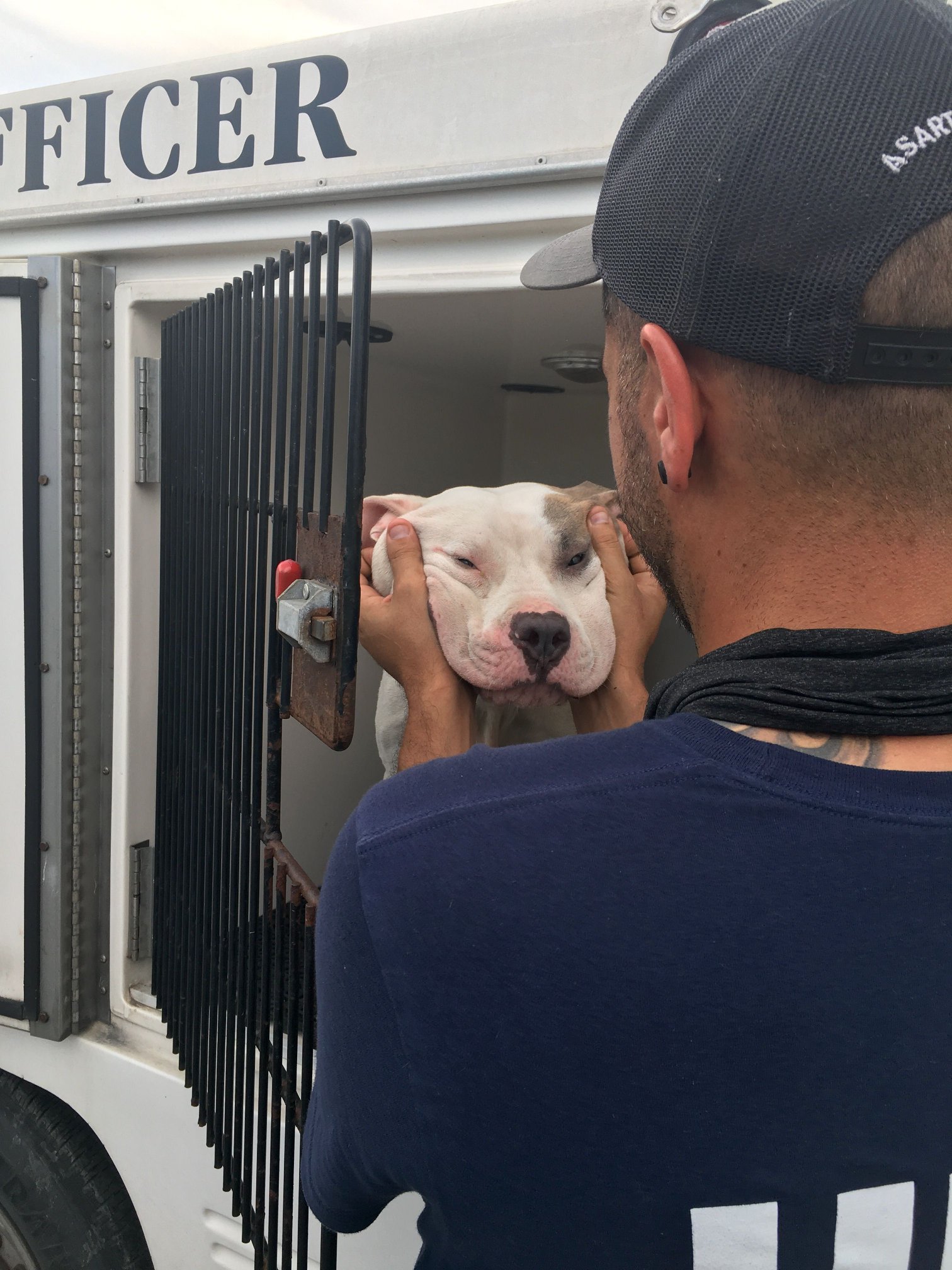 Bubbles is one of many pets left stranded by the hurricane. Anyone hoping to support the Louisiana SPCA can do so by making a donation to them on their Facebook page.

Owners shouldn’t get him back… They abandoned him.

Do not give the dog back to the people who abandoned him.

I agree Angelia…..they left her tethered. To possibly drown.

Please do not return this dog to his owners. They left him chained outside in a shed. They knew a hurricane was coming and left him there – CHAINED with no possible escape!!! They could at least set him free.

You are right Linda!

ikr chaining a dog for a short amount of time is ok if you are humane about it, but the fact they left them chained in a terrible storm, bet they where chained there 24/7

The owners should face animal abuse charges. Perhaps they would like to be chained without food and water in the heat and attempt to survive a storm without any possibility of escape. That precious pup deserves the best in life, not whomever subjected him to this.

Agree with previous comments that NO WAY should this poor dog be returned to callous, monstrous owners who would leave him CHAINED OUTSIDE while the cowards flee a Cat 4 hurricane. NO EXCUSE for this, and if this dog is returned to this heartless, POS family, these rescuers are MORONS. 🤬

they never said they returned the dog, i dont think they will tbh

Chained inside the shed. Says it all.

I thought a law was passed that owners of animals could be charged with Felony Animal Cruelty if they abandoned any animal during storms/flooding. I remember dogs being left chained to trees to drown and to porches to drown.

Do NOT give this precious boy back to some THING who would treat him like trash and abandon him!!

Do not give back to their ownerd

Why do people leave their pets tie or chained? It’s bad enough they have to be left behind. But if they’re tied, they don’t even have a fighting chance to save themselves!!!

I agree with everyone dog should Not be returned. Owners need to be fined, some jail time & never able to own any type of pet, especially dogs & cats.

If this dog needs a love and safe hope, please get in contact with me. The owners should definitely not get this dog back. I would take Bubbles in a heartbeat

For sure! The fact he was so affectionate to his Rescuers, even when scared speaks VOLUMES to his personality! PITS ARE THE GREATEST! I have lost 2 due to illness in advanced age, Fostered over 35 & currently have 3!! He needs to go to a Pit lover like you! Or to Tia’s Rescue so she can find him a wonderful home! NOT RETURNED TO OWNERS WHO WEREN’T CONCERNED enough to give him a chance, as ample warning re the storm!

It’s heartbreaking to see such a sweet, good-natured creature being chained and abandoned in a hurricane! So glad he was rescued. May he find the loving home he deserves <3 <3 <3

Please folks, UNCHAIN, UNTETHER – set free your dogs when a storm of this magnitude is coming. It’s cruel to keep them chained like that because this is what can happen. This poor darling was lucky to make it out alive thanks to the Humane Society.

How do you leave your dog tethered outside in a storm. They need a law to prevent a dog from living a lifetime tethered outside in the elements. If this dog had not been rescued, just by virtue of the chain, he would die from dehydration/starvation. I agree this pup needs a new responsible, loving family. Pet ownership is not a right but a privilege.
Make the owners pay for his rescue and care. Maybe they will think about getting another dog they will neglect. 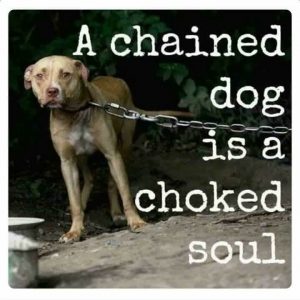 owners should be chained to a shed…stupid people should not be allowed to have animals!!!

Locate his owners?? They abandoned him knowing the situation, they didn’t seem to care! Please do not return this precious baby to his neglectful owners!!

So, how about DON’T try to find his neglectful owners? Shameful of them to leave him tethered, at the mercy of a horrific hurricane.

Please give this precious life a chance at a better life with some new owners that will love and care for him. The POS previous ones deserve jail!

Whoever his parents were they SHOULD NOT get him back. If they gave a crap about him they would of never left him.

Please find this poor dog a New Forever Loving home. The people who left him behind don’t deserve to have him or his love. They deserve to be charged with animal cruelty & abandonment!!!!

TF who leaves their pets to suffer a hurricane on their own outside, even livestock owners who cant evacuate with their livestock/pets make sure all their animals are inside and that the barn is sturdy before the storm. If i owned that dog i would take them with me, idc if it would be hard, if i was allergic, if it would be too crowded, if they puked in my car or peed in it, their life is more important than temporary situation and possibly stinky stuff

The OWNERS NEED TO BE PROSECUTED!!!!! SO EVIL AND CRUEL TO LEAVE HIM CHAINED UP. DO NOT RETURNN THIS DOG TO THEM!

jai For life for despicable humans who abuse animals

Do not reunite this dog with its owners. It would be to his detriment as they have already proven they don’t care about him.

DO NOT RETURN THIS SWEET INNOCENT DOG BACK TO THE PREVIOUS OWNER!!! They don’t deserve him! Please find him a loving forever home that will provide him lots of love and always keep him safe. Thank goodness he survived the hurricane and was uninjured. And thanks to the rescue team for saving him from the situation and hopefully away from the previous owners.
I hope the previous owners are located and are reprimanded for how they treat animals. They should be prohibited from owning any animals in the future. Animals should NEVER be tethered or chained, especially during a natural disaster where there are no ways to escape. Tethering should be illegal!

People who have been doing this, don’t deserve animals in their lives

Animals are precious gifts.
Animals are men’s best friends
If you’re abusing them you don’t deserve them
Abandonar is abuse

Abandonou is a abuse.
Do Not return to abuse

Please do not give this dog back to the owners. They clearly abandoned him and didn’t care what would have happened to him. Please find a great home with someone who will love him like family.

Please can we get a petition started on this one. The owners that left him chained and abandoned should face felony animal cruelty! 😢