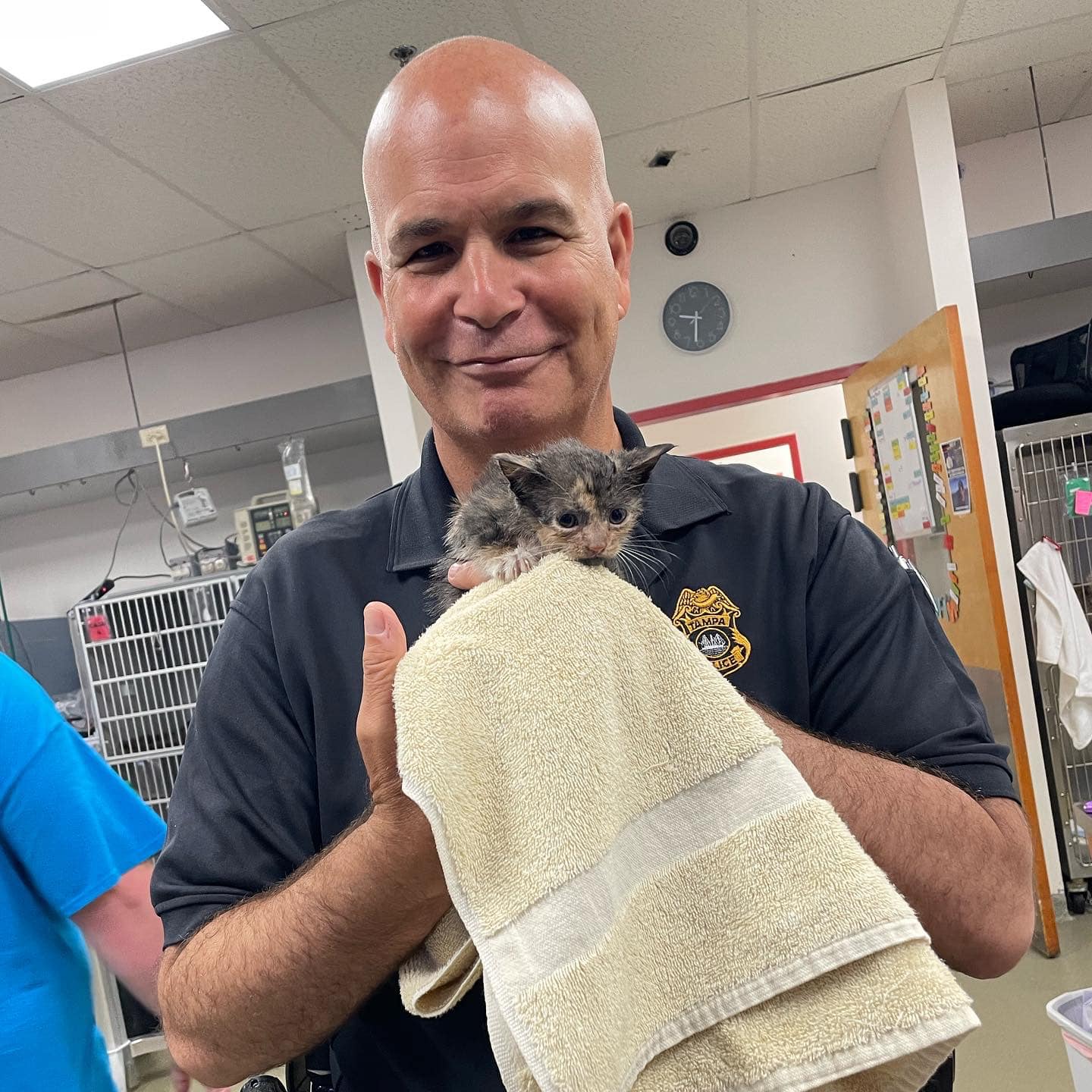 Tampa, FL – A lone kitten, braving the lashing wind and driving rain of Hurricane Ian, was saved by two compassionate Tampa Police Officers. According to the police department, the officers were patrolling the streets during the raging Category 4 hurricane when they spotted the frightened feline huddled in the middle of Florida Ave. 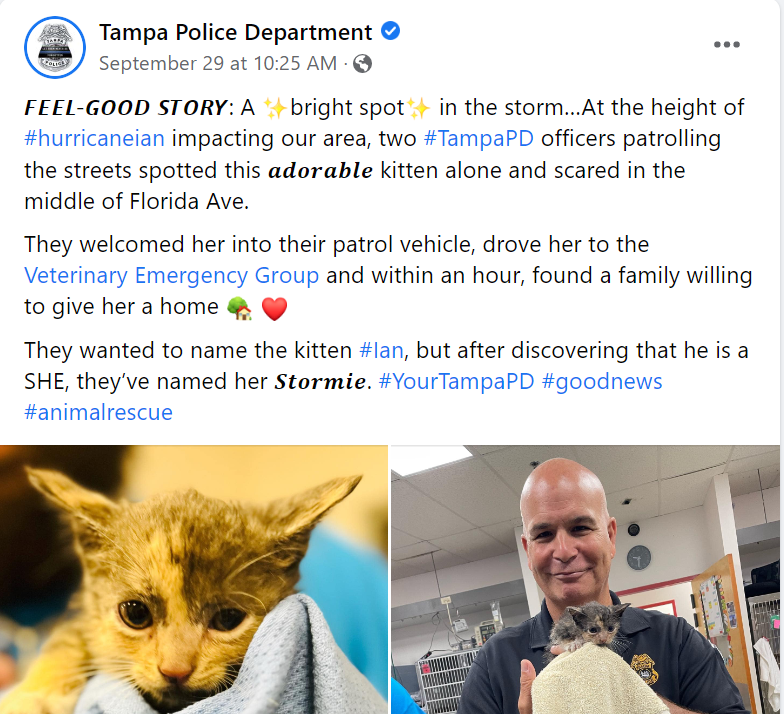 The frightened kitten was plucked off of the street and placed into the patrol car and the officers transported her to the Veterinary Emergency Group. Within an hour, a family was found to take her in. 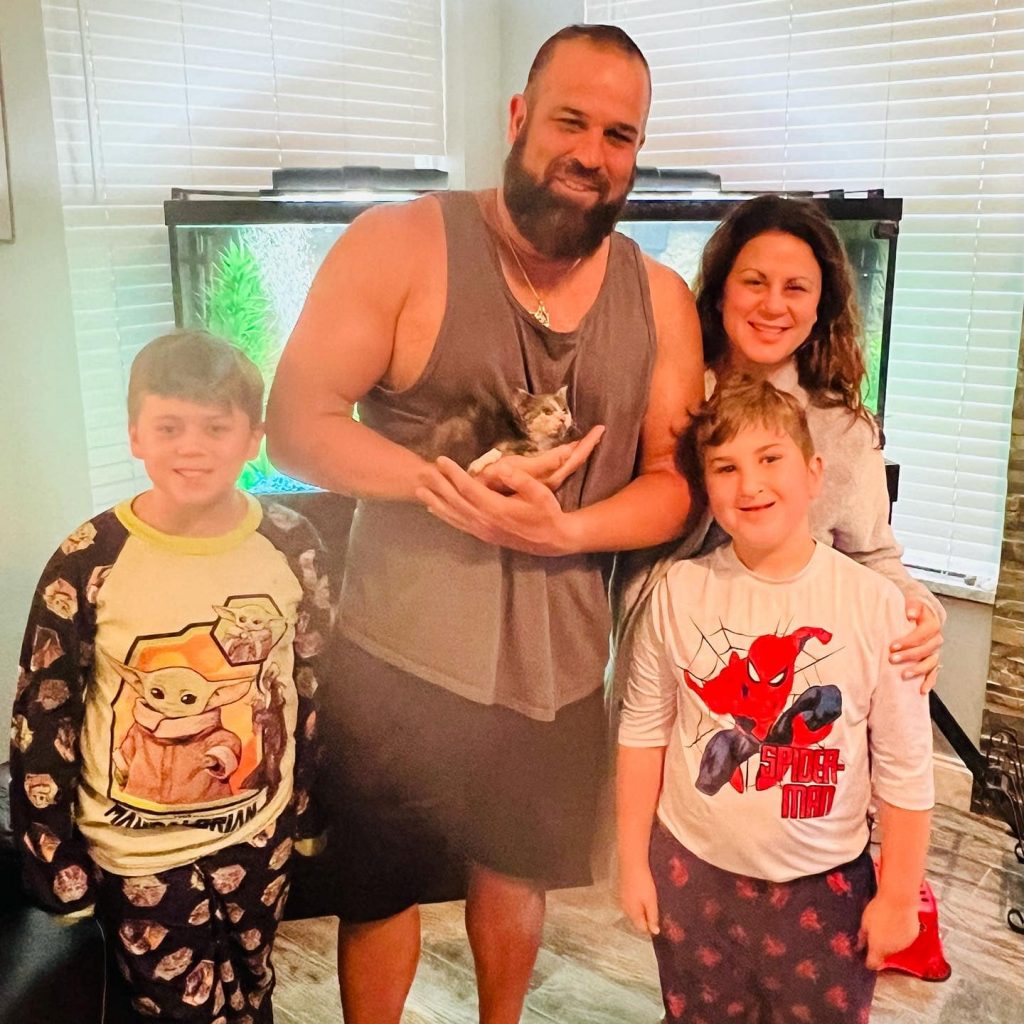 The family wanted to give their new pet a name that would remind them of the massive storm that she had been saved from. The police department explained:

They wanted to name the kitten #Ian, but after discovering that he is a SHE, they’ve named her 𝑺𝒕𝒐𝒓𝒎𝒊𝒆. 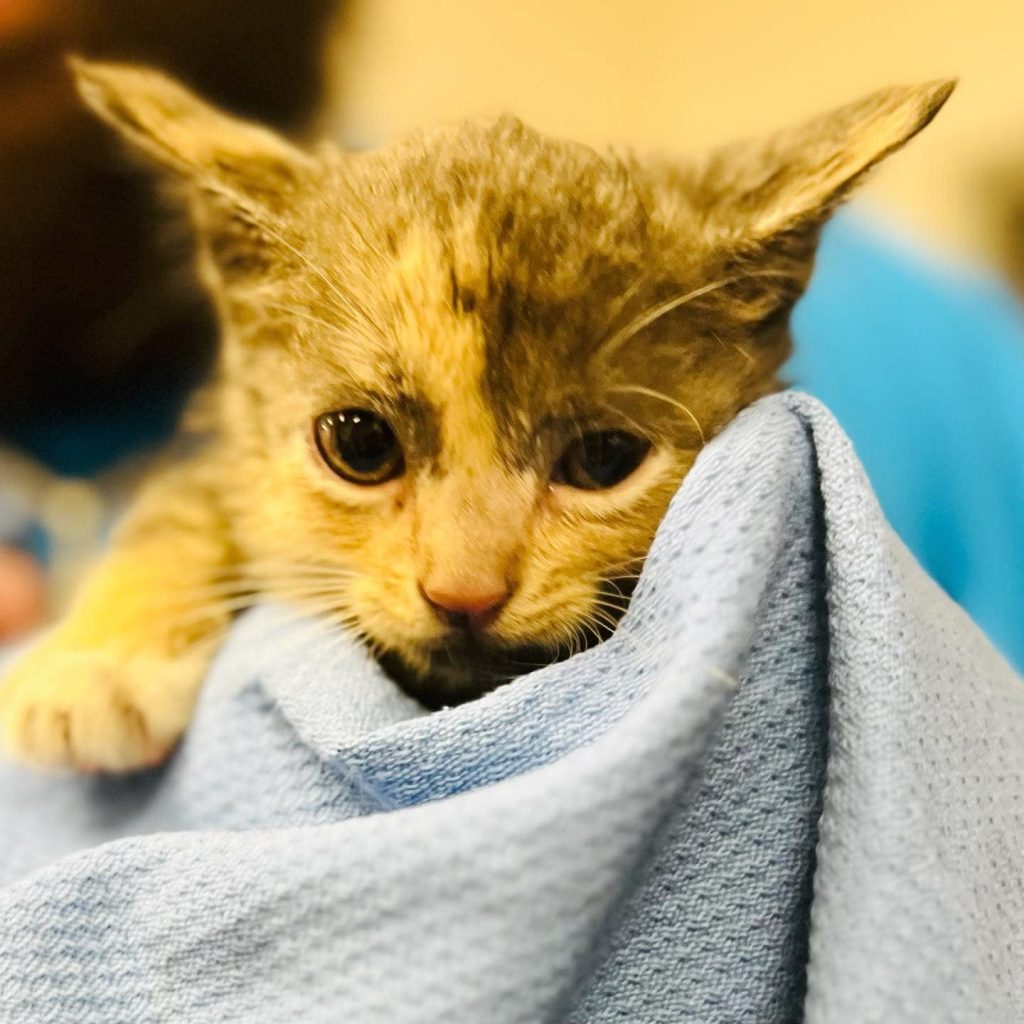 Kudos to everyone involved in saving little Stormie!

This is truly heroic and real men protect those weaker than them.

Now please consider the other animals you victimize with your daily choices like what you eat at meals. or items you purchase like leather wool silk and so on, and go vegan.

Could YOU afford vegan “cheese” from social security, from about 750 € for everything, including rent & additional rent costs, electricity (70 €/month now), fixnet phone & internet, bank account fees and an adopted senior cat to feed??? I can´t, so I´m “only” lacto-veggie, but that since 1988 yet, since when are YOU vegan, since 1 year perhaps??? So stop trying to missionate/educate others, it´s YOUR decision to live vegan like it´s MINE to live lacto-veggie, accept this, eat this.

Nobody needs cheese from animals; for protein treats there are peanut butter, hummus, organic marinated tofu, etc., and animal cheese is just as pricey as any vegan protein, often more so. It’s nice that you don’t eat meat, but the dairy industry is a nightmare all its own, horrible cruelty, despite the ad campaigns. The veal connection alone is cruel enough. Then there are the pregnant dairy cows that are slaughtered and their babies used to make fetal bovine serum to put into vaccines. So much else. Eat dairy all you want, just don’t condemn vegans.

I don’t think offence was intentional here. I’m struggling too. I nearly lost my house due to pandemic debt. I have 15 permanent rescued cats to feed. I’m a vegan. I choose not to eat vegan cheese BECAUSE it is too expensive.

Really defensive about your choices, but glad you’ve eliminated meat. If animal exploitation, suffering and cruelty to animals matters to you, perhaps one day you will see the merits in giving up dairy!

You can make your own vegan cheese. There’s endless recipes to veganize just about anything.

Wool ? Sheep need to be shorn, their wool just keeps growing. It doesn’t hurt them .

Oh please; in nature their wool is normal as intended and they molt when their wool gets too long. What people do to sheep in the wool industry is obscenely cruel and unnatural. People bred them to have wool that needs shearing, and if the industry is ended the breeding would stop. You need to face the realities of using animals as resources. Watch the short video here: https://animalsaustralia.org/latest-news/stop-sheep-cruelty/

Thank you, Laura. I was just about to say the same thing to this person. It doesn’t hurt them? She needs to watch some undercover footage as workers try to shear sheep as fast as possible causing injuries. They sew up the injuries without anesthesia.

That’s debatable. Shearers abuse sheep to the point that the sheep are bleeding when they are shorn. They often kick and beat the sheep they are shearing in the process. I’ve seen footage after footage of abuse from shearers , so wearing wool IS a big issue, as it is supporting a cruel industry.

There are a lot of uncaring cops out there that we hear about but it is always important to remember there are also cops like these guys who will help animals in need. Such a small girl-it’s lucky she was found. Thanks to the officers with caring hearts.

The world needs more people like him! Thank you Sir!

THANK YOU Tampa Police!!! You guys are why we Back the Blue! Thank you for proving we can restore civility to our beleaguered society with a measure of kindness.

I hope the kids learn to be gentle and loving to Stormie, sometimes kids, if not taught, can be very bad for small animals. But hopefully this will be a teaching moment for these young boys to learn to be loving and gentle….

This monster storm Ian in Florida should be a life changer!!! There should be a VEGAN movement in Florida like never before!!! The loss of life should be a reminder that eating animals is also a death grim reaper that should change!!!! Let this be a turning point to stop killing animals & then eating them!!! This kitten Stormie was lucky so let others also be lucky with loving new responsible homes!!!!

True men/women are kind and protective of the helpless and are far stronger than the dumb brutes calling themselves “human” out there.

Bravo you officers for taking notice and doing something.

What a nice story. The police do not get the respect they deserve. It is a thankless job most of the time. This shows there are great people in law enforcement. Thank you to you two for saving this precious little kitten.
For the people who are arguing about vegan this is not the place for this conversation. This is a story that is meant to make us feel happy about others who care not listen to your personal gripes about who is eating what.

I think we are digressing here- this story is about the compassionate rescue of a helpless kitten not the pluses or minuses of vegan diets or the cost thereof. Stick to the story people and appreciate that there was a little ray of sunshine displayed here in the midst of a devastating weather phenomenon.