On June 23, VH1 announced that 43-year-old Ceaser Emanuel, who starred in the Black Ink Crew New York reality TV series, was fired after video was leaked showing him allegedly abusing a dog.

The decision to cut ties followed the release of Ring video footage showing Emanuel repeatedly striking a dog with a folding chair. The same video shows the dog locked in a cage and being pushed down a hill. 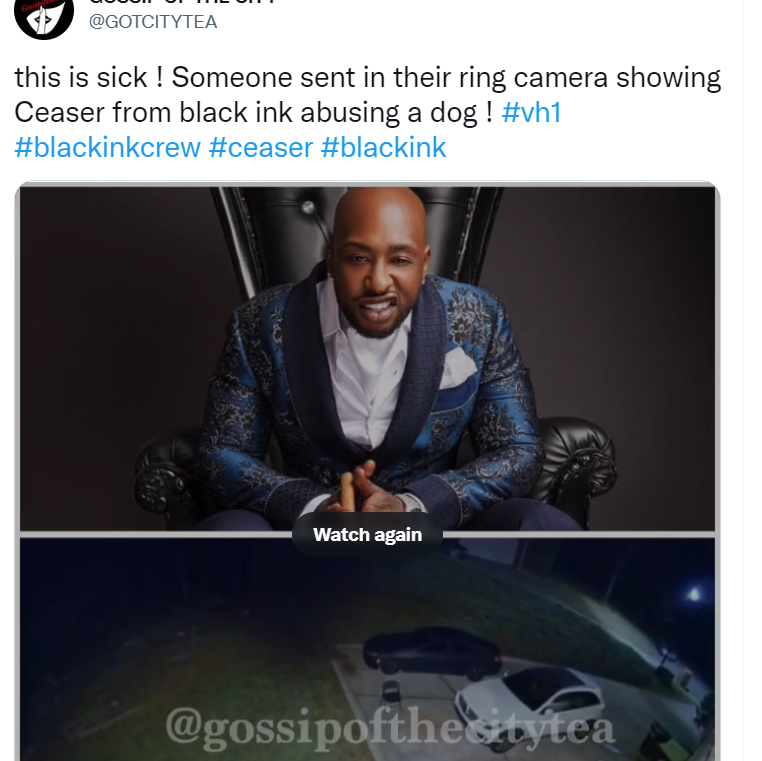 If you can treat a dog like this, it shows how sick of a person you truly are. I don’t even get into the life of this man, but this video made me so upset. Anyone who knows me, knows I LOVE animals. Especially dogs.

Your karma has been adding up for years, but to do this to two innocent dogs!?! This is crazy. CHARGES NEED TO BE PRESSED, and CANCELLATIONS NEED TO BE MADE!

THE WORLD IS WATCHING! 🙏🏽

The reality star’s lawyer, Walter Mosley, claims that the video is old and that it showed the aftermath of a dog altercation. He said that there was a “lapse in judgment” about how to break the dogs up. After being let go from the television series, Emanuel told TMZ that the Ring video was leaked and that it was a “set up,” explaining that his dogs were fighting and he was attacked by one of the dogs when he tried to break them up.

Comments on the Yahoo news article about this situation reveal doubt from people who watched the video. 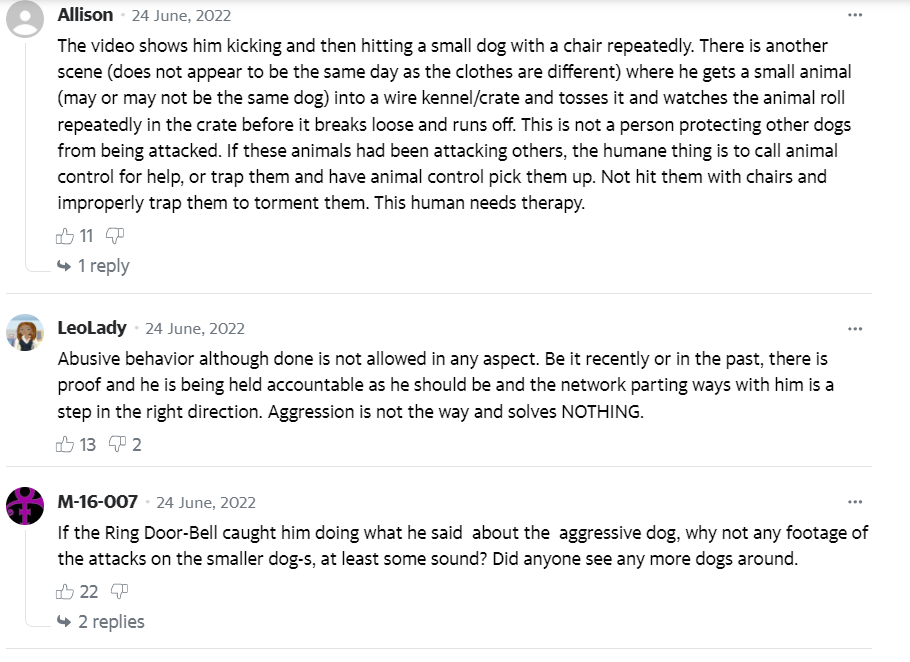 Watch the video on Twitter here. Feel free to weigh in with your thoughts about what happened.

Does he still own the dogs???

That was going to be my question.

I hope the dogs were taken away! I hope he never gets a job on TV and He’ll is to good for him. Then he has the never to say a last in judgement, my ass

Long jail sentence is needed with no parole,and then he can rot in hell.

Guess u thought no one would report u. U r getting ur karma back I hope they canceled the show. U don’t deserve rewards for harming an animal.

Needs chair took to him

He was allegedly abusing a dog!! NO, he was an is an animal abuser and got caught. He’s a creepy little man anyway! I’m glad through his own meanness and stupidity he exposed who he really is. If he’s doing this stuff to animals, he’ll do it to people too. He’s probably abusing those closest to him!

He needs to be beat with the chair. Does not deserve to have animals. Period.

He deserves the same treatment. Miserable monsters like this deserve nothing good in life to come their way. Hopefully he loses everything.

MONSTER!!! Should be locked away from society!!!

Hope worst is yet to come for this guy.

I hope someone took that poor dog away from this monster and that he will be investigated and punished for animal abuse! That animal needs to be safe from retaliation!

Glad he was caught n happy he lost his fame!! Should b locked up too!!

Holy shit! This is sickening! I hope he gets what he deserves, I’d like to offer my services. Anyone else?

But were the dogs taken away?

That’s bs! Cause what is your damn excuse for pushing the dog down a hill in a damn cage? You are a weak bitch! This is why I stopped watching your show yrs ago! You are a weak pathetic human you aren’t allowed to be called a man cause that you are not and to hit a dog with a folding chair mutliple times rather if old or new there is no excuse to abuse or hit an animal with any object! Come try that shit with me old man!

He needs to be prosecuted for animal cruelty just like anyone else. Thankfully there were cameras. I am sure that this is a pattern with this man. As far as him being some sort of reality star, I never heard of him and couldn’t care less. It doesn’t matter who he is except that he is an animal abuser.

POS. Don’t know who he is, but he’s not worth knowing.

Jerk couldn’t even come up with a believable excuse! Not only a dog abuser, but a lousy liar too.

Serve him right, hope he never works again!!! Perhaps he will get abused with a chair, on or out of prison!!!! Karma do your worst!!!!

New reality for you: Get a job and leave animals alone!

Hmmm I’m trying to find the right word but none is powerful enough to decribe this piece of S. Scumbag? Looser? Wanna be? 15 minutes of fame and nothing else? I don’t know. He is just so scummy that I can’t even bother with him. He is the scum beneach my shoes. May you be punished to the fullest dregree!