Skeletal Horse, Abandoned In The Desert, Was A Former Racehorse 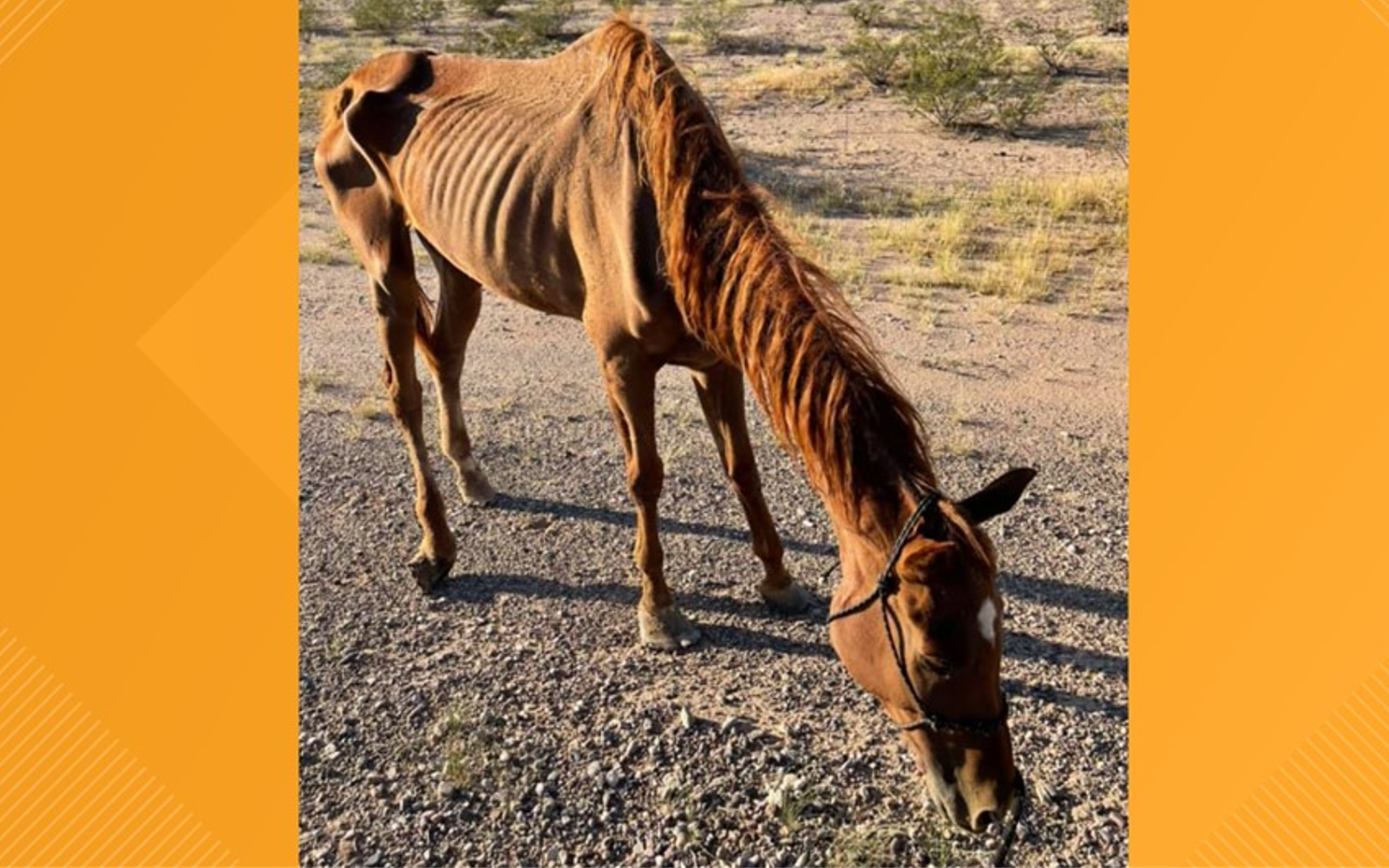 A skeletal horse, abandoned in the Arizona desert, is slowly recovering from extreme malnutrition. The horse was found in a field near Gila Bend, and rescuers with Hope Ranch Arizona were alerted to her presence. In a fundraiser, the rescue group recounted how they were informed about the ailing horse:

Yesterday evening we got a call from some good people (and the help of a police office). They reached out to our Ranch about a horse they spotted in an open field that was sick and possibly injured. We immediately jumped into action and headed their way. When we came across this sweet horse, that had apparently been left to fend for herself. She appeared relieved and immediately started to drink the water we brought for her.

As reported by AZ Family, the rescue group believes that the horse, dubbed Blessing, had been on her own for upwards of four to six months, and she lost 600 lbs.

The people who took the skeletal horse in made a shocking discovery about her past…she has a lip tattoo and a brand that reveal that she was a former racehorse whose name was Pleasing Dom, and she was born in 2012. 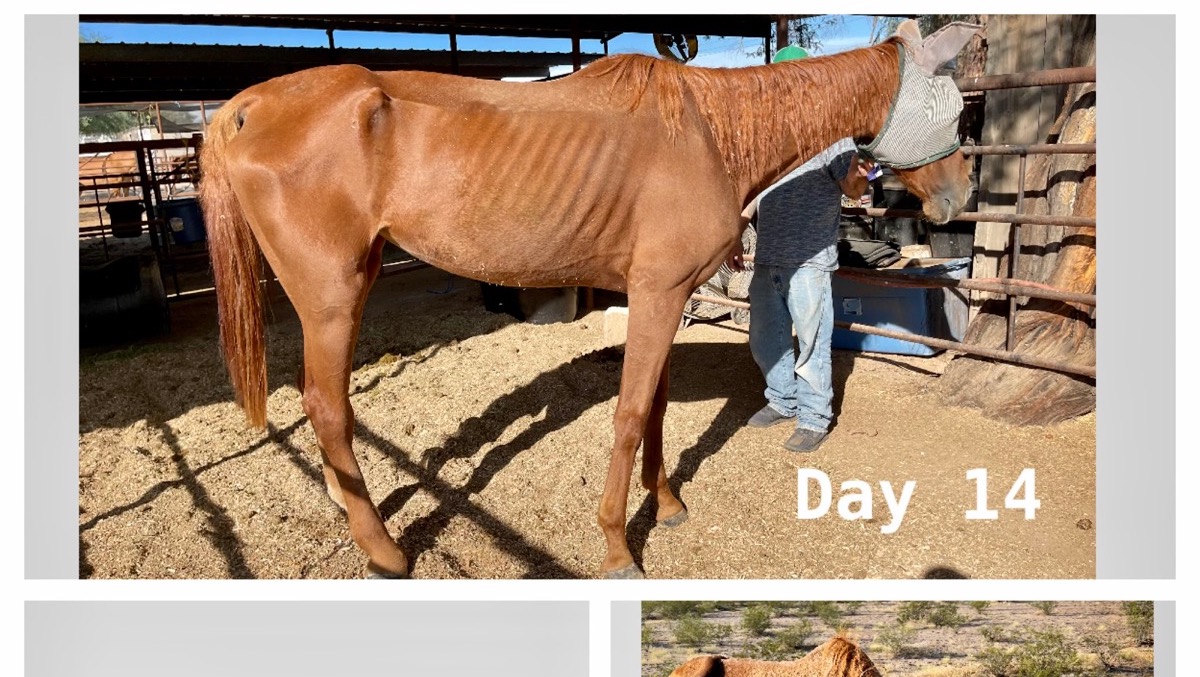 Though Blessing’s history is somewhat known, it remains a mystery who left her to die in the desert. But today she is safe and receiving the love and care that she needs to recover. You can support her recovery by making a donation to this fundraiser.

How anyone could leave a beautiful creature like this to die is beyond me , how do they sleep at night ? Thank God there are caring people out there who spotted this poor girl & got help for her , thank you to all the people involved in the rescue of this beautiful girl . I hope she now finds a loving home where she gets the love & care she needs ….

Amen!! To hell with animal abusers!!

There are hundreds of people involved in horse-racing that are completely capable of carrying out such a heinous act. When a horse is no longer winning, or even finishing, owners will go to any end to dispose of the animal. Thousands of Thoroughbreds end up at slaughterhouses with horrendous injuries. Rather than humanely euthanize the poor creature, they load them up on a trailer or truck and haul them to the nearest auction where “kill” buyers are plentiful. To turn a horse out in the desert to fend for herself, after she was cared for on a regular basis, is akin to dumping your dog or cat in the wilderness to fend for his/herself. People who are capable of such heartless acts are devoid of cognitive moral actions. Their consciences are seared.

Terrible — all the more reason to SHUT DOWN Horseracing FOREVER — what an evil business.

How can someone do this heinous cruelty? Soo hard to understand!

One more reason for racing to end though it is unclear who abandoned her. Thank goodness she was found though and is not with people to help her gain a whopping 600 pounds.

That broke my heart to see the shape this poor horse was in. How could anyone just throw her out like trash and not care what happens to her?! I’m so glad she was rescued and is recovering.

I do not understand why the owners are not being prosecuted ? The article says it is a mystery who left her out there – would not the owners be responsible ? She was owned by Judge Lanier Racing the operation of Colorado Ranch owners Tom and Sandy McKenna. Unless she was reported stolen at some point .

They probably sold her after her racing years were over.

Well that should be investigated otherwise it’s all speculation. An investigation CAN be done SOMEONE needs to pay for her suffering

THIS IS THE REASON HORSE RACING MUST STOP!!!!!!!!! Make the subhumans who did this pay for their actions!!!!!!!! May she recover and find a home where she is loved and taken care of!!!!!!

Blessing (Pleasing Dom) ran in claiming races at Zia Park and Turf Paradise her entire racing career.. She ran 5 times from September 2014 to January 2015, earning her owner, Judge Ranier Racing, LLC, $490 during that time. Where she has been for the last 6 years is anybody’s guess, ex-racehorse tend to disappear when their racing days are over. She could have been used as a broodmare because she has G1 winner, Storm Cat, on her sire’s side. Whatever her story, I’m so thankful she was found and Hope Ranch Arizona stepped up to take her into their rescue.

Heartbreaking to see . Blessings to all those saving this poor horse ! ❤️🙏

I can’t believe they don’t know who did this. They have to know who the owner was and in the end they are responsible for what happened to this horse. They are probably very wealthy and the police won’t go after them for that reason.

HARSHER punishments! These kind of humans are monsters. They truly have no purpose here on earth or in life. Our world is becoming worse and worse. I hope this majestic being has a full recovery and and beautiful new home full of love.

Some of The Horse Racing Fraternity do not care what happens to the horses once they are deemed too slow or are retiring from a life at the track they’re cast aside like the poor greyhounds are. These people are a disgrace they care nothing about the animals just the money they can earn.

This is HORRIBLE!!!!How could anyone do such a thing to an innocent helpless horse? The same thing should be done to the EVIL beings that did this. They are a THREAT to society and they should be held accountable for their actions.This would help slow down abuse in the United States evil people would be more scared to abuse or neglect in knowing the same action would be done to them. They should NEVER be allowed back into society.

I hope they find who did this and prosecute them to the fullest extent. It shouldn’t be hard to track them down.

Thank you for reciting this sweet horse. I say it’s not really a rescue if whoever have the horses is going to use the animals for rides or work. Please let the animals live in peace WITHOUT BEING RIDDEN OR USED FOR ANYTHING shes been through too much already

If this was a racehorse the person who did this should be found and punished. Of course, then most are eaten, as selling horses for meat is not a crime in the US. Just shameful.

This is a very sad story and it happens a lot to racehorses. The racing industry is evil &!cruel. Horses are often thrown out like trash. If they are not sold to the pet food buyers (who are often waiting in trailers outside the track after the races) when they are not winning, owners will often give or sell them to grooms, jockeys or others at the barn. Often some of these people can barely take care of themselves and their families. They really cannot afford a horse but the owner doesn’t care. He just unloaded a horse that isn’t a winner. And he can feel better because he didn’t sell the horse to the kill buyer. That person he gave his horse to may then sell the horse or who knows what happens to it. Even winning horses have been found starving in a field somewhere. And sometimes as hard as a rescue tries, that horse just cannot be brought back to health. There is no good excuse for this. Please do not support the racing industry. It is the reason that this happens – that’s the bottom line.
It’s all about money in the racing industry; nothing is about the horses or the horses welfare long term. Of course they take care of them while preparing for the big race.

I hate people especially those who do this. They deserve to rot in hell.