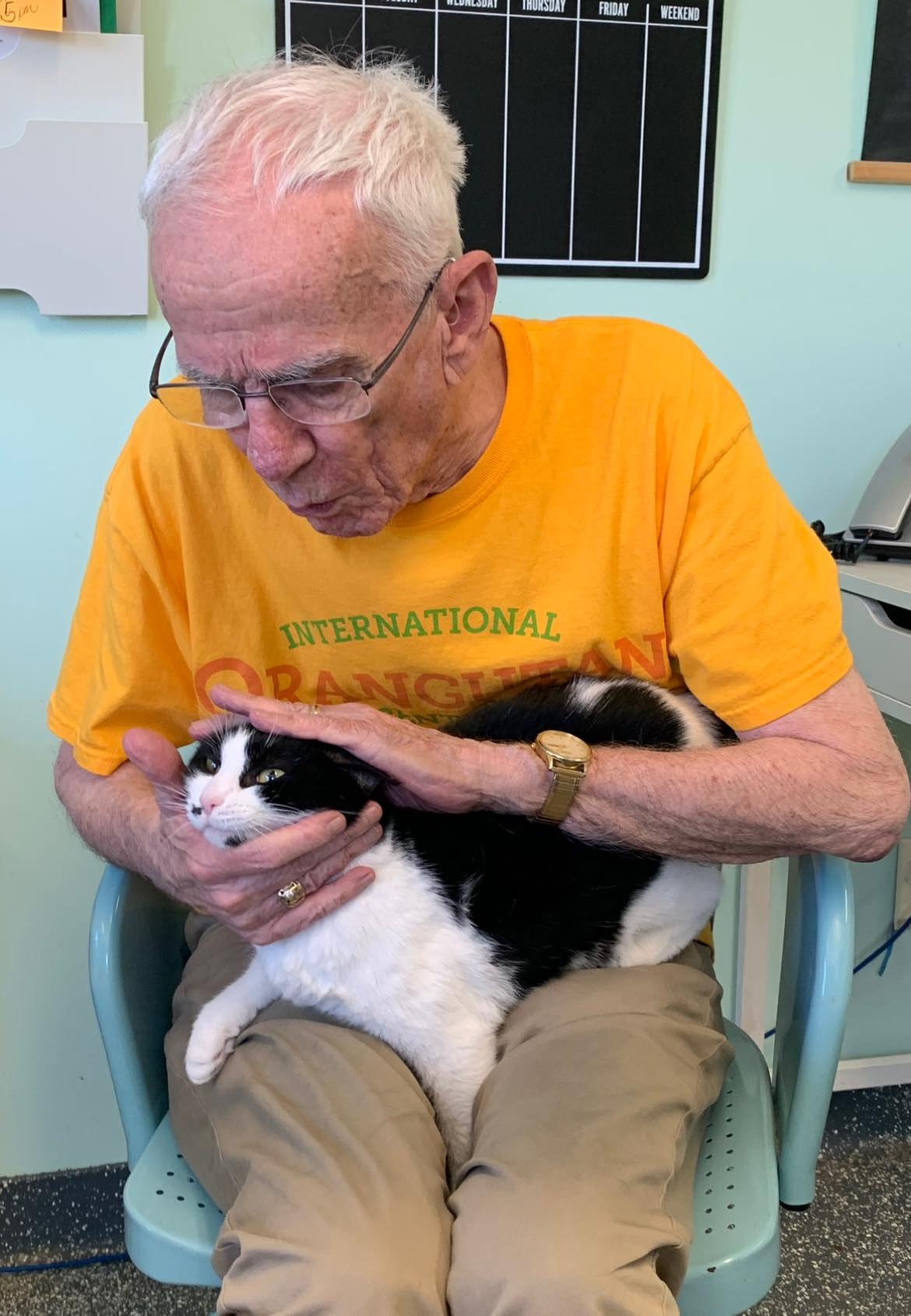 Johnson County, Indiana – An older gentleman recently found a cat to love after being turned away by multiple shelters in Indiana. The man was looking for an adult cat to adopt because he knew that he would not outlive a kitten. 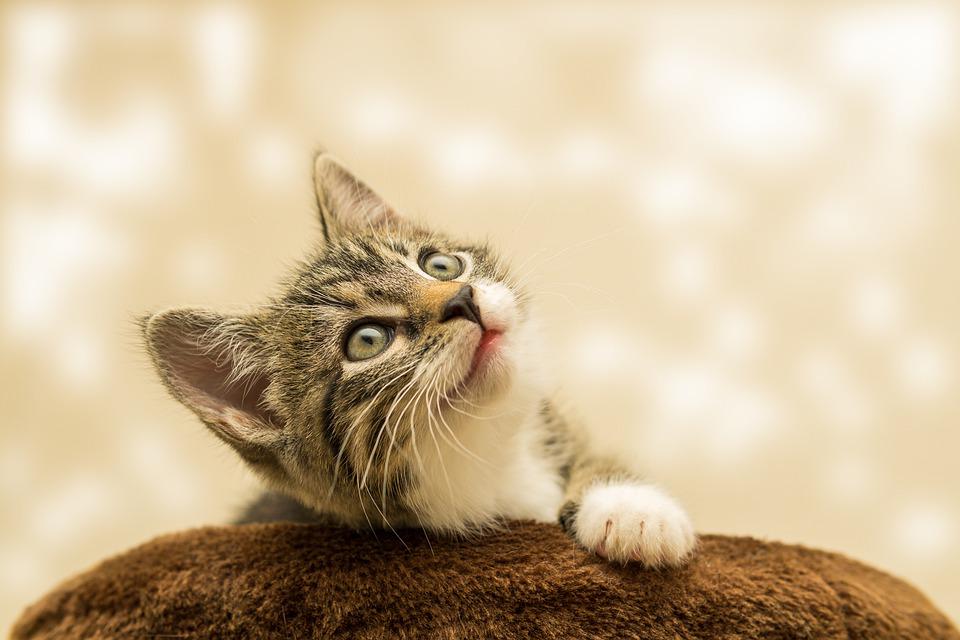 But his common sense approach toward adoption was not good enough for most of the shelters that he visited. Fortunately, the Humane Society of Johnson County was willing to work with him to find a perfect match.

On August 9, the animal welfare agency recounted what happened, explaining the man’s introduction to a cat named Rosie, and what they needed from him to make an adoption happen:

We advised that we would just need to know his plan for Rosie if something happened, he had a plan ♥️ fast forward a week and he called us and asked if Rosie was still available. She was!! He said I tried to go to other shelters and they said no.

We are ageless in our pursuit of companionship, oh how we would hate to turn away this love match ♥️ His joy is immeasurable.

Thank you for not being age discriminating. Someone’s age has nothing to do with their heart. So happy these two are able to share their lives. LOVE THIS ❤️

Beautiful! Hope he and Rosie have many wonderful years together!!!

For a change a heartwarming story of someone who cherishes an animal unlike the usual assholes that permeate this space. Kudos to the Humane Society of Johnson County for bringing these two together. Great story!

The other “shelters” were thoroughly reprehensible for refusing to allow a senior citizen to adopt a senior cat, and especially since he had a plan for someone to take care of the cat in case something happened to him. I wish the article had named the other shelters. They need some education about life.

Well worded! I completely agree with you!

So glad to see this sweet pair together. Never judge because we are seniors! How shameful! You could have asked what his plans are for the adopted kitty. A simple question. May the goddess bless them and watch over this dear pair forever more.

I would certainly adopt a cat to an elderly gentleman who had a succession plan. To not adopt is the worst type of age discrimination. The cat has someone who loves her and the gentleman has a new best friend.

ALWAYS Bring Together Animals & Love & Care — Nothing else makes sense!

LOVE IT!!! We hear so much negative about animal abuse and neglect, getting this email gives hope, that tiny 4 letter word that does a soul good to know humans are out there.

Progressive shelters have “Seniors for Seniors” programs pairing adult cats with seniors and ensuring the cats will have safe shelter if and when the person can no longer care for them. EVERY shelter should have this program.

I agree with you. What a wonderful program!

Thank you for not only helping this sweet girl find a home, but allowing this man to have a best friend and his dignity. Getting old is hard enough, but for people to always use your age against a person is really hard to understand and accept. Thank you

I had to give away my baby, I call my cats my children as I was unable to have any. My neighbors are Vietnamese and it turns out they got keys as they have senority in this building, and they planned to beat and eat her. My cat k ew it, as she called my attention to him doing it to another cat. I heard it and was horrifying! So, I know a foster who takes cats in and finds them homes, so I brought her there at 111/2! I had her since 6 weeks! I was overjoyed when I called my friend and asked her if she was okay, she said she was adopted at 6 weeks the widower loves her! I asked who got her, she said an elderly old man who just became a widow, he’s already vetted and approved! I was happy as after the episode with the other cat, she wasn’t my cat anymore, she was always on the dun, fearing for her life! This gentleman is very happy with her and I’m happy she’s back to her old, loving self! So, my headache and he’s are over, thank God for fosters! It was kinda funny when I went there, my old boyfriend, Jack owed a very bill that he couldn’t pay 21 years ago, and his cat ran the place, I just asked if that was Romeo, she said yes, you k ow him? I said it’s my exes’ cat, he couldn’t afford the bill to fix her hip. She told me the cats was there a long time, I said I know, know the cat!

Vietnamese are horrible people towards animals. They do horrible things to animals in their lousy country as well.
They hold bears prisoner in tiny cages and drill a hole in their stomachs to extract bile out of their liver. These bears live in tiny cages their entire lives, 20 years and longer. We need to hold these monstrous people accountable for their evil deeds.

The same thing happened to my mother 10 years ago, then 77. We wanted to rescue a dog for her. She wanted an adult dog but was turned down repeatedly siting her “age.” She was perfectly fine. My mother found it very humiliating and found it needlessly cruel and ridiculous. My mother finally found an adult dog that was obviously “dumped,” according to the vet we took him to looking for a microchip. My mother and Jack had a wonderful relationship. Devoted to each other. My wonderful mother passed away 2 months ago. Jack is now 13, He is now my dog.

I’m so glad this wonderful man and cat found each other. Beautiful. <3

So very glad that Rosie found her forever home and this older gentleman will have a new family member. Advocating more Senior pets for Seniors!

Ahhhhhhhh, a match made in heaven and facilitated by earth angels! Thank you for helping this gentleman and Rosie.

This makes my heart happy. I hope they have a wonderful life together, however long that might be.

Hope they have many more happy years ❤️😻

Clearly, the man had the awareness to not get a kitten and had a plan for if he died before the cat. I am glad he finally found a shelter that had the compassion and attitude that allowed him to have a cat and Rosie to have a good home. I hope they have many years together.

Thank you for giving him a chance. I can totally understand not wanting to give a kitten or puppy to an elderly person, UNLESS they had a legal document stating where their pet would go if something happened to them. I wish them both a happy long life 🙂

That’s a great story!!!!! I’m really happy they found each other ❤️❤️

Great story! Thank you to the Humane Society of Johnson County for bringing these two together. Shame on the shelters who turned this man away who only wanted to love and care for an elderly cat who MOST will not adopt. Too many animals are stuck in shelters or euthanized instead lets match them with there forever homes!!

Having a pet to love gives meaning to the lives of many aging people often it can extend a persons life. And having a human to love will give the cat better quality of life and may even extend its life as well. I wish them years of love and companionship.

I am glad the shelter who did let him adopt Rosie, did take the step to make sure he did have a plan in case something happened to him, And that he did come up with a plan. I was in rescue for 2 decades and I did hear storied of rescues allowing elderly to adopt a kitten because they will take back cats, I did not agree with that approach, because lets say this 80 year old lady lives 5 years, now this rescue will get the cat back and they will maybe try to adopt out a 5 year old adult cat or stick it in their rented home they keep all their cats who are not in foster. I felt it was unfair to that kitten. Didn’t they have an adult cat this 80 year old lady could adopt??? I was not happy….

ALWAYS Bring Together Animals & Love & Care — Nothing else makes sense!

Great ending! Seniors need the love & companionship. I would trust a nursing home with a mascot also.

Makes no sense that this earth angel was denied the ability to adopt since finding homes for older animals is a huge challenge.