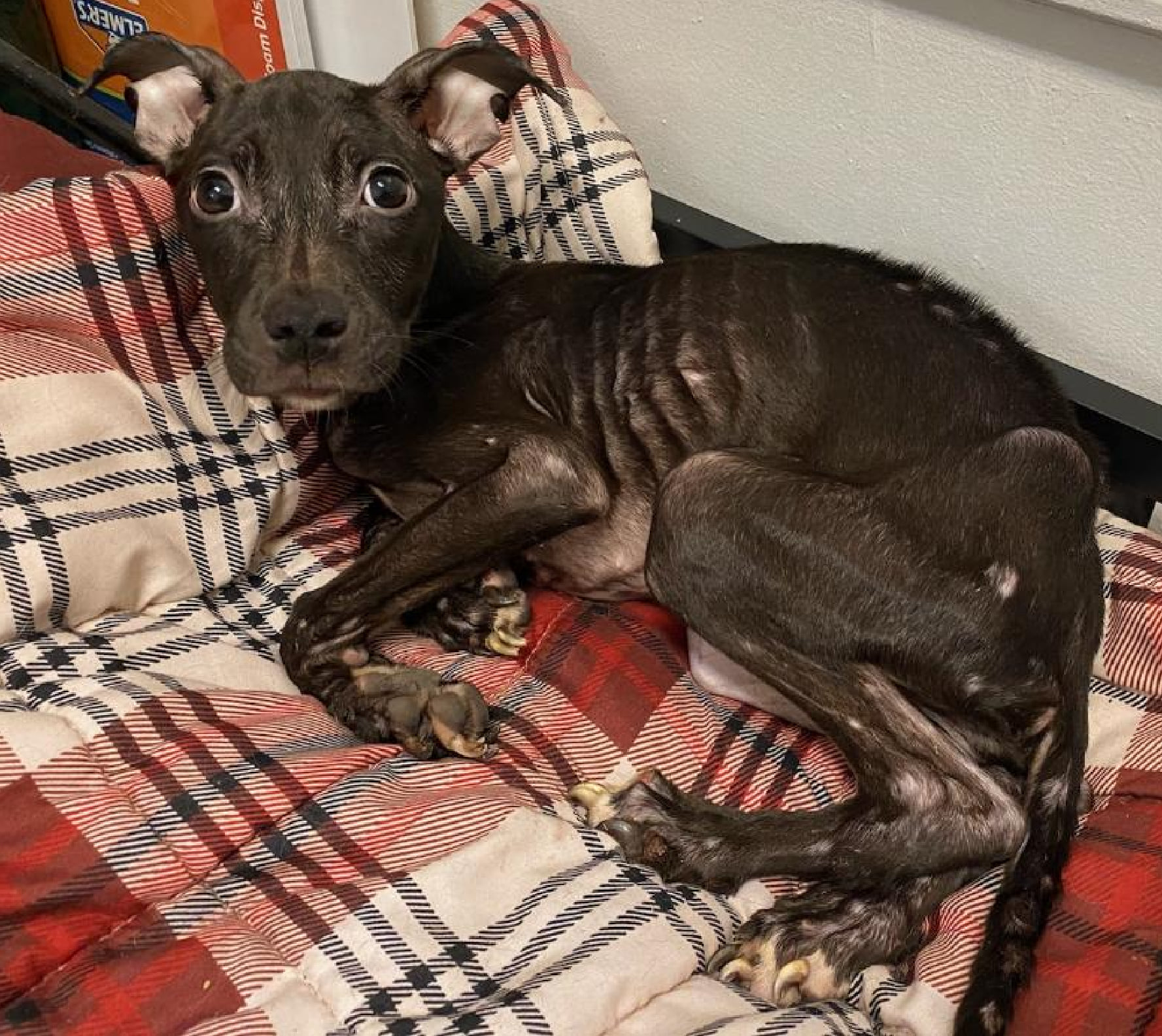 Associated Humane Popcorn Park Shelter, in Newark, New Jersey, is offering a reward for information about an emaciated puppy who was abandoned outside of an apartment complex in Newark on August 19.

The animal welfare agency has announced the offering of a $1,500 reward for information leading to the arrest and conviction of whoever is responsible for neglecting and abandoning the puppy, who has been dubbed Petunia.

In a release, the shelter explains what is known about the cruelty case:

“Animal Control for the city of Newark received the call at 3:51 p.m. to go out to the Grafton Avenue apartment complex to retrieve a puppy that was abandoned. The ACO spoke to a witness at the scene who stated that when she saw a car pull in, she assumed they were dumping trash but when they pulled away, there was a puppy tied to the fence. Unfortunately, there was no opportunity to get the license plate of the vehicle.”

The puppy was rushed to the shelter, where an exam revealed the extent of her injuries and pitiful state of health from being neglected:

“Our veterinarian estimates her to be approximately five months old and sadly, she weighs just 10 pounds.  She was covered in urine and feces, as well as blood.  Examination revealed her to be extremely dehydrated, so fluids were immediately administered.  Puncture wounds were discovered under scars that were crusted over which are likely the result of bites from another animal, and her teeth are in poor condition for such a young dog.  Her overall body condition is very poor but despite this, she has a strong appetite and is grateful for all the help that she’s receiving.”

Though Petunia has been subjected to unimaginable cruelty, she has maintained a sweet and loving disposition. The animal welfare agency writes:

“Petunia has been greeting staff members with kisses and craves to be held. She is probably the happiest, safest, and most cared for that she’s ever been, and we will do everything in our power to ensure that she has every chance at living a long, full, happy life in a wonderful home once she has recovered from the terrible treatment that she endured.”

If you have any information in this case, please contact our AHS Newark facility at 973-824-7080 or email: newark@ahsppz.org.

Know that you are loved, Petunia.

I always have to wonder how people can do such things and just not care. I am grateful she was found, is now getting the love and care she deserves, and will never suffer again. Thanks to the ACO and others who are caring for Petunia.

Our Heavenly Father, Holy be Thy Name, Thy Kingdom Comes, Thank Thee for all the blessings, Asking for Thy Help that will help somebody finding a poor & innocent starved puppy’s hardhearted torturer as soon as possible, please? For Thine is Kingdom, the Power & the Glory, Forever & Evermore in the Name of Jesus Christ, amen.

I truly hope they catch the SOB(s) that did this to this precious puppy. If and when they are caught, they should be euthanized. No room in this world for sub-humans like them!!!

i have one better. put him in a dark cold room for a week with true dog lovers like me. punishment should 100% match the crime. maybe that would make these garbage subhumans think twice before harming helpless innocent animals

A pox on those who starved and abandoned this little dog- thankfully there was someone there who saw this and compassionately saved her.Unfortunately for those that are saved like Petunia there are many cats and dogs that are not and that is truly heartbreaking.

GEEZUS NO!!!! DEAR GOD WHAT IS WRONG WITH THE HUMAN RACE???

Petunia’s torturer deserves to face & live in hell!! These abusers & killers deserve retaliation & the seizure of their rights! They have no right to torture an innocent animal !!! They deserve to be locked up in a hell type of environment!! Petunia deserves the best TLC & the very best new guardian who will be madly loving her & giving her a loving forever home!

Prayers this POSMFB gets caught

TAKE OUT THE GARBAGE THAT DID THIS TO THE POOR PUP…MONSTERS SHOULD NOT BBE ALLOWED IN SOCIETY!!!

The mind boggels that we live amongst such cruel people. Poor little thing. Hope she gets better soon and so happy she was found. Such mindless cruelty in this world. Don’t know how these people sleep at night. SHAME ON YOU

You are safe now little Petunia. Wishing you a long and happy life ❣️🐕xxx

I want to believe that these demons covered in human skin will get what’s coming to them The gates of Hell are open to receive them ,

That vicious despicable monster has to caught and punished and suffer. Thank you for rescuing such a sweet girl

Sadly…Petunia’s horrible former owner(s) will probably never be found or punished for their cruelty…But the Good Lord led her rescuers to find her and will surely ALSO find a forever home for her !!! She is Blessed !!!

Bless all of you for caring and loving her…God bless…

I really hope the authorities find whoever did this to Petunia. She’s just a baby. How can anyone be so cruel and heartless to do such a horrible thing to an innocent baby? May this foul person have nothing but misery in their worthless life.

This asshole or assholes who did this should die. People are shit

For those of us who are flowing and shared this angel’s story, hopefully we will get updates.

awww sweet life you didnt deserve the evil that happened to you….but look at you now..you are safe you are loved go live now xoxox let kharma deal with those sociopathic scum