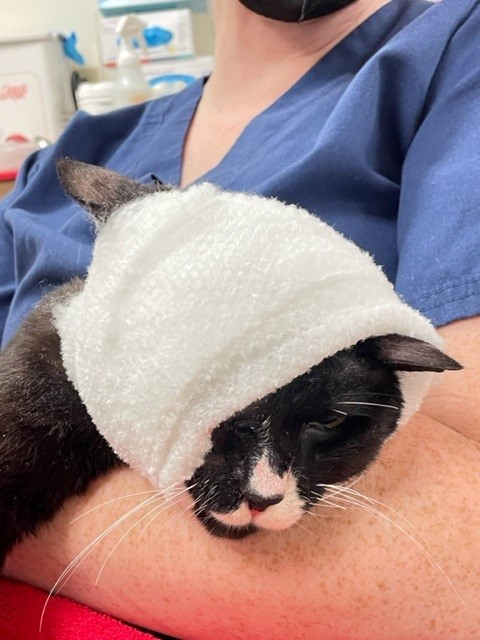 In late January, a severely injured cat was abandoned in a pet carrier that was left at a rest stop in New Canaan, Connecticut. The tuxedo cat was discovered by police officers and the New Canaan Animal Control was called in to assist.

Because of his injuries, the cat was transported to a veterinarian who determined that the cat had two broken legs and traumatic injuries to his eye. The Pet Animal Welfare Society of Norwalk (PAWS) was contacted for help, and the cat, dubbed Highway, was taken into their care. 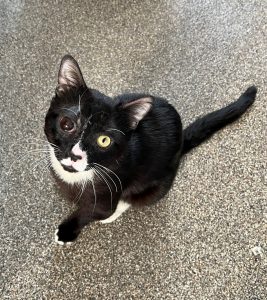 Great news! Highway has undergone a successful eye removal. He tolerated the surgery well and is now recovering and resting comfortably.

According to the surgeon, Highway’s injured eye was likely the result of prior abuse and it was believed to have caused him tremendous pain. Fortunately, the eye removal surgery has eliminated that pain, and now Highway can heal. PAWS said:

The next step is to consult with surgeons on how to repair his two broken front legs, again caused by suspected abuse. Highway is one of the lucky ones. He is away from his abuser(s) and is now surrounded by love and care from the staff/volunteers at PAWS. We’ll keep you posted on his many steps to his recovery.

Eventually, Highway will be adopted out, but at this point in time, the animal welfare agency is not accepting applications. Anyone interested in helping the agency financially can go to www.pawsct.org and click the DONATE button!

Damn cowards that would do this to this innocent baby and then abandon them!! I can only pray that karma (God’s revenge) deals them the same fate.

It breaks my heart that humans can do such abhorrent things to animals. Worryingly this sort of abuse often spills over into the abuse of other human beings! They will pay for the pain they inflicted on Highway!!! I hope he goes to a wonderful loving family who will spoil him rotten, just as he deserves.

I hope the subhuman that did this dies a slow painful agonising death!

Heartfelt *PRAYERS* for Highway’s complete recuperation, comfort, wellbeing, and safety. May he find his loving permanent person/family and home as soon as he is well.
And may Justice find the devils that did the most unspeakable and heinous of all crimes to him.

Any POS who hurts an animal is a coward. They pick on an small animal that can’t fight back. There is a link between animal abuse and domestic violence and child abuse. These monsters need to be locked up.

A huge thank you to the kind compassionate people who rescued Highway and those who now continue to care for and give him the love and respect he deserves.

Unity Prayer: The Light of God surrounds him. The Love of God enfolds him. The Power of God protects him. The Presence of God watches over him. Wherever he is God is . And So it is.

HOW do people who commit these crimes on the voiceless, the innocent , and be able to sleep at night? WTF is wrong with you? They say “Karma’s a bitch” and when it finds you, I hope it’s bad ….sooo bad for you and your loved ones.

I hope all animal abusers get beaten up severely, suffer greatly, lose all of their money, become homeless, and die a slow, painful death. They don’t deserve freedom, forgiveness, or light jail sentence. They need to suffer the way they made the poor, innocent animal suffer.