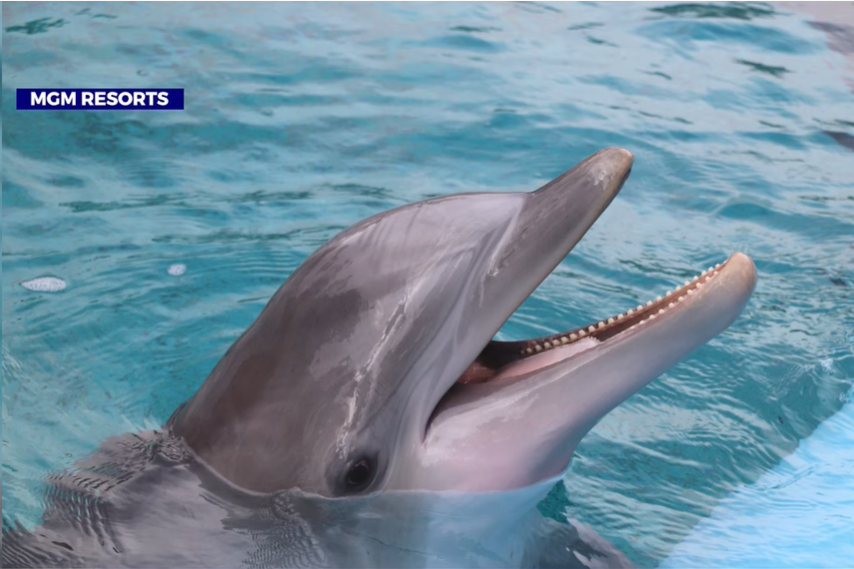 Las Vegas, NV – The second dolphin in a month has died at the Mirage Secret Garden and Dolphin Habitat in Las Vegas. The 11-year-old bottlenose dolphin, named K2, died on Saturday. He had been receiving treatment for a respiratory illness.

I am devastated to share with you that K2, an 11-year-old bottlenose dolphin at The Mirage Secret Garden and Dolphin Habitat, died Saturday. He had been receiving treatment for a respiratory illness. All of us are heartbroken over this tragic loss, especially our amazing animal health and care teams who love and care for our animals on a daily basis.

Kallao described K2 as “vocal, (and) energetic,” and noted that he “loved his toys.”

Earlier this month, 19-year-old Maverick died at the same dolphin habitat. Prior to Maverick’s death, the resort lost Bella to a gastrointestinal illness. The dolphin habitat has been temporarily closed for an investigation.

I cannot stress enough that nothing is more important to us than the health, safety and welfare of the animals entrusted in our care. We are temporarily closing the Secret Garden and Dolphin Habitat to focus our efforts on ensuring that we have the safest possible environment and the best care possible for our dolphins and to give our team the time they need to process and grieve.

(image of K2 via screenshot)

These precious animals should NOT be kept in captivity,for people’s amusement! Release them to their natural habitat, if that is possible at this point.

When will these places GET IT already that these marine mammals DO NOT belong in captivity? ALL of these places need to close and the remaining animals sent to appropriate sanctuaries. What unnatural and sad lives they have. 🙁

Yes and Now! I am so tired of these Innocents Being used in any kind of Industry! Leave them alone! Didn’t anyone ever teach these Animal Abusers Look but Don’t touch! Look from afar! Geez 😒!

Let’s get them closed down! What a tragedy! I love Dolphins 🐬 they are so Beautiful and Loving 🥰 Innocents! God Speed to them and all Animals! I am so sorry you were the victim of Animal Abusers! RIP 🌹🥰♥️🙏😇🤗 Sweet Baby! I will NEVER STOP 🛑 FIGHTING FOR ALL OF YOU!

Marine mammals do NOT belong in captivity; neither do big cats or any other nondomesticated animals, period, the end.

“I cannot stress enough that nothing is more important to us than the health, safety & welfare of the animals entrusted in our care” said the resort’s Interim President Franz Kallao.  I would ask Kallao, who, or what power on Earth ‘entrusted’ a dolphin to a resort business’ care, what he’s talking about? Did the Las Vegas resort pay to buy or go to the ocean & kidnap the dolphins themselves?

GREED is driving this exploitation of dolphins & supporting a VERY cruel harvesting of them in Japan. Driving them into coves & mercilessly killing families, entire pods!!! If there are BUYERS, these horrific events will SELL some for resorts such as this. Check out SEA SHEPHERD reports of this horribly inhumane & disgusting treatment of both whales & dolphins. GREED = LAS VEGAS & CERTAINLY NO PLACE FOR MARINE LIFE TO LIVE

you really did not just post that,,,,,, you are a shame to humans….. call Peta and tell them that….. so ignorant….. you should NOT have animals captive period. These is no care that you can give them that is enough….except freedom —ass

EVERYONE OF THE ANIMALS AT THAT PLACE NEED TO BE RESCUED AND TAKEN TO LOVING SANCTUARYS IF THEY CAN’T MAKE IT IN THEIR NATURAL HABITATS BECAUSE OF THESE PEOPLE! CLOSE THIS PLACE DOWN!!

REST IN PEACE TO THE 2 (AND ANY OTHERS!) THAT HAVE DIED BECAUSE OF THAT DAMN PLACE!

I get not just sad and angry about these deaths and the exploitation but frustrated by the people in these venues who claim to know so much about whales and dolphins and clearly know too little or do not care enough to understand that such beings do not belong in captivity due to stress of such unnatural conditions.

They don’t mean everything to you ,they are money to you. Taking their natural lives from them and confining them to suit you is a slow death caused by you !

shouldnt be there anyway,,,,shame on you

really burns me…..This is just ignorance and carelessness for animals. After all that has happened to animals world wide and all the millions of people trying to help and rescue them and you still have the audasity to have captured animals…….my God are you that stupid- or maybe you just care only about the revenue it brings your company…..it is just sickening really…..

Out of their Natural Habitats or Sanctuaries, Dolphins live miserable, hellish lives — The Mirage Secret Garden and Dolphin Habitat is a HELL-HOLE for Dolphins — Transfer our ALL Dolphins either to their natural homes or Sanctuaries.