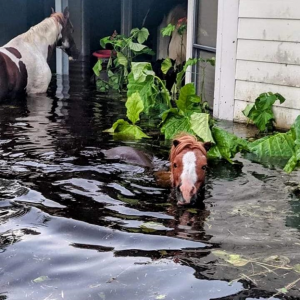 Below are photos and stories from a few of the organizations and individuals we worked with to provide supplies and funds to assist with the rescues. 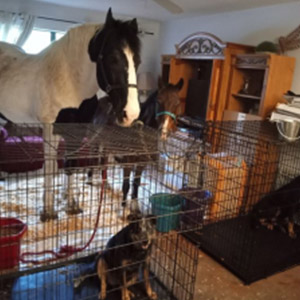 “In addition to running a foster-based rescue, the FUR Urgent Transport program helps animals in natural disasters and other emergencies. FUR has done disaster relief missions to help animals in danger during 11 different hurricanes and natural disasters, in addition to completing multiple rescue missions on the ground in Ukraine. We move out dogs and cats who were in the shelters prior to the storm, making room for the incoming flood of strays and owner surrenders. We do not transport strays. Our goal is to empty dog kennels and cat cages so the shelter staff doesn’t have to make the terrible decision to euthanize for space.”

Scroll down to read their most recent update 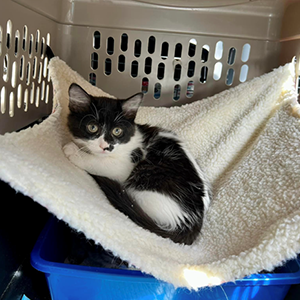 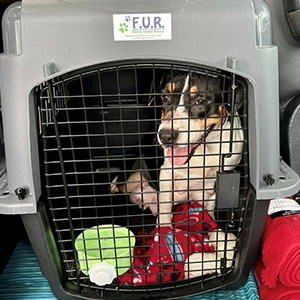 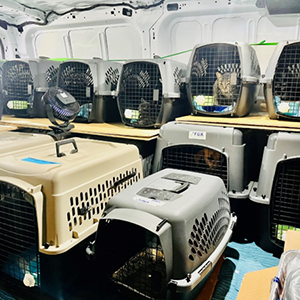 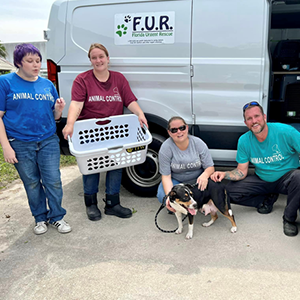 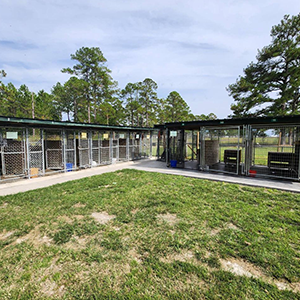 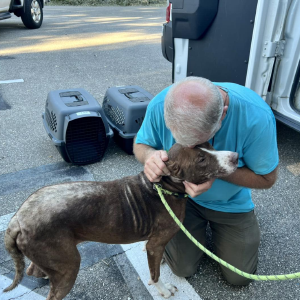 The first trip after every hurricane is the Leader’s Recon. We see the news and social media reports, but we can’t call impacted shelters and ask about the situation because their phones and power are out. Even those shelters that have a generator, or someone available to answer questions on social media, get a deluge of messages from people all over the country and they simply can’t keep up.

Without knowing the situation, we load up and drive toward the flooding. We visit shelters in areas that were impacted by the storm, meet the dogs and cats, relay information to our shelter and rescue partners up North, and start to plan future transports.

Our leaders recon this trip consisted of Walt & Shelli and Mike. We were planning to meet Carolyn and Stephen Wagner, two experienced FUR Fosters who moved to Cape Coral last year. The five of us were going to visit local shelters, gather information, and start laying the groundwork for follow-on transports.

The first indication that we might have a problem came when we had trouble buying gas on the East side of Orlando. When we passed Orlando and Lakeland and started approaching the Gulf coast of Florida, the real trouble began. We were trying to go to Ft. Meyers, but every road we needed to take was underwater. I-75 was closed due to flooding, so we took various back roads trying to get around the flooded area.

No luck. The one road we found that was open was changed to all lanes in the outbound direction. There was no physical way to get through. We told Carolyn and Steven we wouldn’t get through, and we waved off and started visiting shelters that we could reach. Every shelter we visited had power out, and flooding nearby. Damage to homes and businesses extended far beyond the “cone” that everyone focuses on.

Two Types of Danger to Animals

In every disaster, there are two types of danger to the animals. First, the storm itself can be deadly, so we try to help evacuate animals from shelters in advance of the storm. Our initial focus is animals in outdoor shelters or rural shelters without secure facilities where animals may be at risk.

Second, and equally deadly, is the aftermath. In every disaster, the staff and volunteers in shelters that weren’t actually damaged are relieved… for a while. Then people who evacuated returned home to their damaged homes and businesses. In addition to the strays coming in after the storm (with extended stray holds), there is a wave of owner surrenders that come into the shelters by people who lost their homes or their jobs. When the shelters are already full, there is nowhere for these animals to go. Shelters have to kill healthy animals for space to make room for the wave of incoming animals. That’s where FUR comes in.

The FUR Urgent Transport Program moves out dogs and cats who were in the shelter prior to the storm, freeing up space for the incoming strays and owner surrenders. We don’t transport strays. We’ve been fortunate to work with a great group of partners in different regions, but this year has been challenging for shelters and rescues all over the country.

Even though the primary goal was to gather information and lay the groundwork for future transports, we brought back five dogs with us from shelters impacted by the hurricane:

Walt and Shelli Shay were superstars, as always. In addition to holding the record for the most FUR fosters, with over 100 foster dogs in the last six years, they always help out in every emergency. With Walt leading and Shelli navigating, the trip went as smoothly as it could with flooded roads and traffic backed up. When we finally got back home, Walt and Shelli also held all five pups at their house overnight before we could move them out to other locations.

Thank you Valerie Losego for coming out to vaccinate them on short notice, and Pet Paradise for once again helping us board our hurricane pups. And Thank you Carolyn and Steven for continuing to be part of our FUR team and helping out on the ground there, even if we didn’t make it there this trip.

Rescues and Shelters Needed to Take in Hurricane Ian Dogs and Cats!

We still desperately need receiving rescues and shelters in Northern states to take in dogs and cats impacted by the hurricane. We need more dogs and cats moved out of Florida, and Northern states have spay and neuter laws, fewer backyard breeders, and less overcrowding in shelters. Even though it’s tough everywhere now, it’s tougher in the South, especially in Florida. If you’d like to help take in animals, please Email: transport@floridaurgentrescue.com

Now we’re on the road again, heading back again to the Gulf Coast…

Animal Victory is thrilled to introduce this group of heroes below who were responsible for saving multiple horses who were trapped by flood waters in Venice. Nikki Marie, her husband Hank Duyn, and their friend Matt worked together to get stranded horses out of chest-high water.

Scroll down to read more. 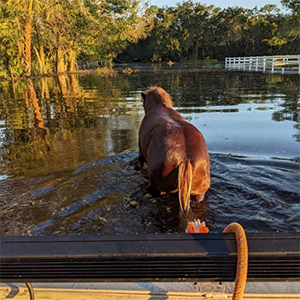 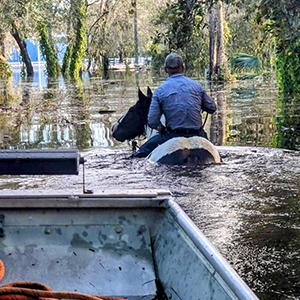 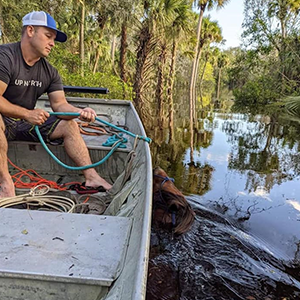 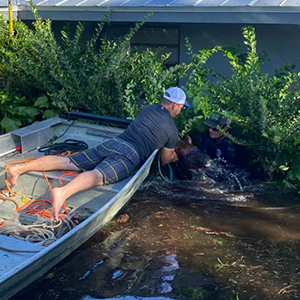 “This is the reality of how some of these horses had to get out. The water was too deep for them to walk. They were scared to swim or couldn’t. Hank and Matt had to halter them, put them next to the boat and float them 3/4 of a mile to at least an area where they could walk in the water to get them out. A few of the minis they had to tie and put in the boat to get them out. Few of the horses were comfortable enough to swim. But the horses All were able to get to dry ground and get taken to safety and didn’t have to sit for days in the water.”

Thanks to the heroic trio, the horses did not die in the deep water. Unfortunately, the time they spent in the flooded areas DID take a toll on their bodies. Nikki said:

“Lots of medical issues come with them standing in water for days. He picked up horses yesterday that we hadn’t been able to get to because of road closures. Those horses had swollen legs and are going to have health problems for probably a while because of it. I know of some in Arcadia that have been sitting in water for days because the people won’t do what Hank and Matt did to get them out.”

The rescued horses were taken in by other horse owners, and one farm with room to spare.

“One of the ponies Hank Duyn, Matt Connours and the range deputies helped save in Hidden River had a baby! Both horses currently healing from severe aspiration pneumonia (both SAA values over 3000, that’s as high as the reader goes!) and severe dermatitis and cellulitis on all legs from standing in the water for days before rescue. Thank you everyone for your donations to help treat Cash and Zitta they have a long road to recovery. ❤️‍🩹“ 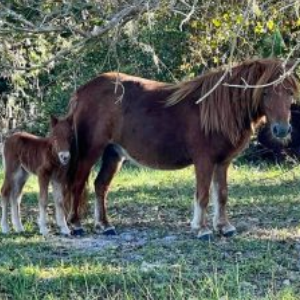 “We managed to get a trailer load of feed, medical supplies, and fencing to pass out to those in need in Venice! Some even had to be delivered by boat!”

Please click the purple button below if you can help.