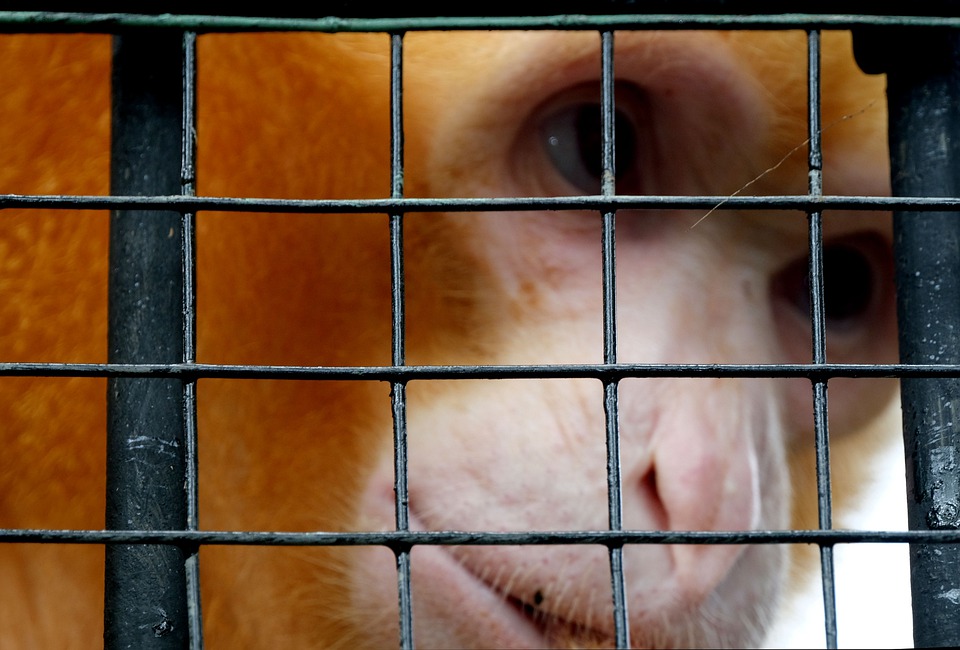 Update 1/23/2022: After the publication of this article, the state authorities Tweeted an update to area residents:

Crash Update: All monkeys have been accounted for.

The CDC has stated that the first three monkeys were euthanized after being captured. No word on the final monkey that was located on Saturday.

Residents near Danville, Pennsylvania, were warned to be on the lookout for monkeys on Friday afternoon after a truck hauling them to a laboratory in Florida got in an accident and several escaped. The truck was pulling a trailer with 100 monkeys inside and four escaped after the vehicle struck a dump truck near an Interstate 80 exit in Montour County. The authorities Tweeted a warning to people in the area:

The crash, and escape of laboratory-bound monkeys, led to a slew of comments on Twitter…ranging from concerns for the monkeys to humorous speculation that this may lead to a zombie apocalypse.

With several people noticing the resemblance between this situation and the 1995 movie, Outbreak. 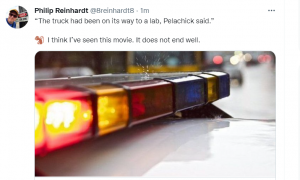 By Saturday morning, the state police notified the public that just one monkey remained on the loose…but there was no clarification about the fate of the three other monkeys. Were they captured? Were they killed? Were they injured? Where are they now?

And the big question about whether or not these monkeys were carrying any diseases has yet to be addressed. PETA science advisor, Dr. Lisa Jones-Engel, warns of possible dangers to humans: 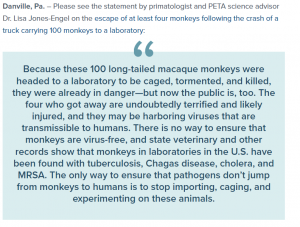 Anyone in the area who DOES spot the last escapee is asked to call 911 to make a report.

Utterly appalling that Fauci keeps running cruel and unnecessary experiments on helpless animals like monkeys and dogs!!! Let’s put HIM in a cage and have mosquitos bite and eat HIS face. That worthless, evil POS!!!

This have been going on for far too many years and not just Fauci. Animal experiments are awful and unnecessary. They were shipped here from somewhere in Africa. Probably stolen from their mom’s. Look at all the Universities and how they torture pigs, cats, dogs and all the pharmaceutical companies. The three babies that were euthanised or probably shot were the lucky ones. The other will live in pure hell. Awful. What kind of individual would take a pay check to torture animals

devil usa has a history of torturing and murdering animals. And look at evil peta. how are they assuming the monkeys are diseased.aiding & abetting & justifying murder if these monkeys.. I spit on peta & devil usa

Poor monkeys they have no voice. There shouldn’t be any experiments done on any animals when our jails are filled with human animals

Here we go again! It would appear Fauci and his globalist buddies are attempting to unleash another deadly plague on the world.
And there is no justification whatsoever for animals to be used for their torturous and depraved experiments.
It’s beyond twisted, and the evil doers responsible for this need to be held to account for all of it.

I wish people would drop the misinformed political blather and just see this tragedy for what it is. Defenceless sentient creatures headed for torture until their lives are prematurely snuffed out. Ordinary Americans need to stand up for creatures trapped in labs to bring these ongoing crimes against sentient animals to an end.

Run monkeys, run! If you get caught, you will be tortured. Run for your lives.