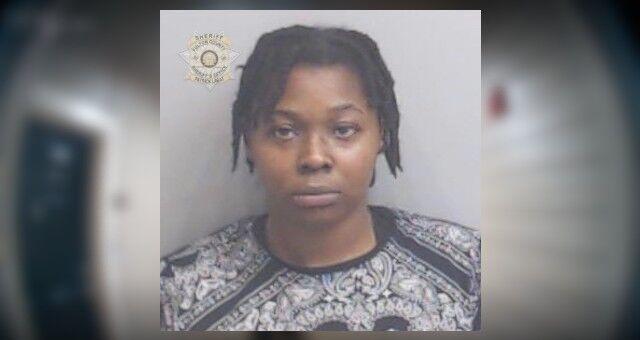 On February 4, police in Fulton County, Georgia, arrested a woman believed to be responsible for beating a small, white dog. The beating, which was captured on Ring video at the Landing Square Apartments on December 16, showed a woman viciously beating the dog with a shoe, before picking it up and walking away.

After an investigation, the authorities arrested Dwanisha Rayniece Hitches on a charge of animal cruelty; she was booked into the Fulton County Jail.

There is currently no information about the fate of the dog who was beaten.

Original article about this situation can be found here.

This piece of shit needs to be beating with a shoe the same way she did to the poor dog.

Yes and not stop !

Abhorrent behaviour by this POS. She needs to be held accountable for her actions. Remove the dog from her, do NOT allow her to own any animals ever, send her to jail, give her a huge fine, community service and get her some intense therapy. Now give me a shoe so I can beat the shit out of her!

Absolutely agree with everything you said!!

Don’t have a shoe handy, would you take a bat?

LOL. I like your way of thinking but I’m going to pass on the bat because then I might be sitting in jail …for a very long time.

or a lead pipe

Never let her out again.

An eye for an eye! I don’t know why we allow abusers to have rights when they obviously didn’t show any mercy to their victims? I’ll bet if abusers had the exact same things done to them that they do, abuse would decline. Why not give it a try and see?

You are totally right.

Exactly, we’ll said. The innocent get nothing and the guilty gets a slap on the wrist…enough is enough!

Never let her out!she is a danger to all living beings.!

LOCK HER UP WITH THE HUMAN SCUM SHE DESERVES TO BE SURROUNDED WITH SHE WILL BE RIGHT AT HOME-IN PRISON!

evil bitch, no soul, hopefully she will be treated the same way

I hope she gets a punishment. POS coward!!

i’m glad they caught her. I worry about the dog…since they can’t seem to find it. I hope they throw the book at her..

I read in an article “all pets were taken to shelter and are safe.” Kudos to all those involved in identifying the abuser and taking action for the fur babies.

I hope she receives a ban on contact with any animals , for life. She is obviously a dangerous person to have around the vulnerable and dependent, this would include children and elderly people. I also hope they find her little victim alive and manage to place him/her with kind compassionate people.

Beat th he shit out of her

This sorry excuse for a human must be punished in the extreme and never ever allowed near another innocent life! That means anyone who is a living breathing not in prison life! She should never get out of prison !!! She should spend a lot of time with animal loving angry brutes and get her self tuned up!!!

It’s interesting how K9 units get a free pass to hang their dogs to unconsciousness, helicopter and kick them, electroshock, etc., and vivisectors (under the guise of “research” (which it’s not) can torture them in any way their sadistic little hearts desire, and with OUR money, etc., and then we think we can stop the violence and cruelty by going after some individual member of the public. It ALL has to stop, including institutionalized cruelty, or we’re just trying to roller skate up a steep hill.

Ugly-ass fucking cunt. She should be beaten with a hammer, skinned alive and thrown to a pack of wolves.

Maximum justice for the evil done to the precious baby!

She’s a piece of shit. Take that dog away from her!

In a prison, not stop

Discussing behaviour shame on you maximum sentence and should not be able to have contact with animals again . Hard punchments needed

The dog is In a bad way and needs to be found ASAP .

Dwanisha Rayniece Hitches is a cruel evil sadistic black devil and she must pay!

thank god for the ring camera…. a case just like this happened here in tulsa okla, over the summer, and 2 guys went to jail for doing the same….MFers all need to be locked up and never get out….hope this little dog was not hurt and rehomed to loving people…. the dog in tulsa was and is now living the best life….

How can anyone hurt a little animal like that, I can’t bare to think of his cry’s when she beat him, I hope she goes to prison, it’s time that the justice system recognised animal cruelty/torture as the VERY SERIOUS crime that it is and treat it as that, we need to come down hard on these EVIL people, it’s getting more and more commonplace for people to hurt animals, SOMETHING HAS TO CHANGE

Why hasn’t the dog been removed from that place? This infuriates me 😡😡😡

This horrible, evil, sadistic bitch should be beaten up by two men at the same time, and should never be allowed near any animal for the rest of her life. She is sick, mentally deficient, and a horrible coward to pick on and hurt a tiny dog.

Where do I sign for this vivous woman and man? The man that stole a horse rode til it’s legs were damaged?