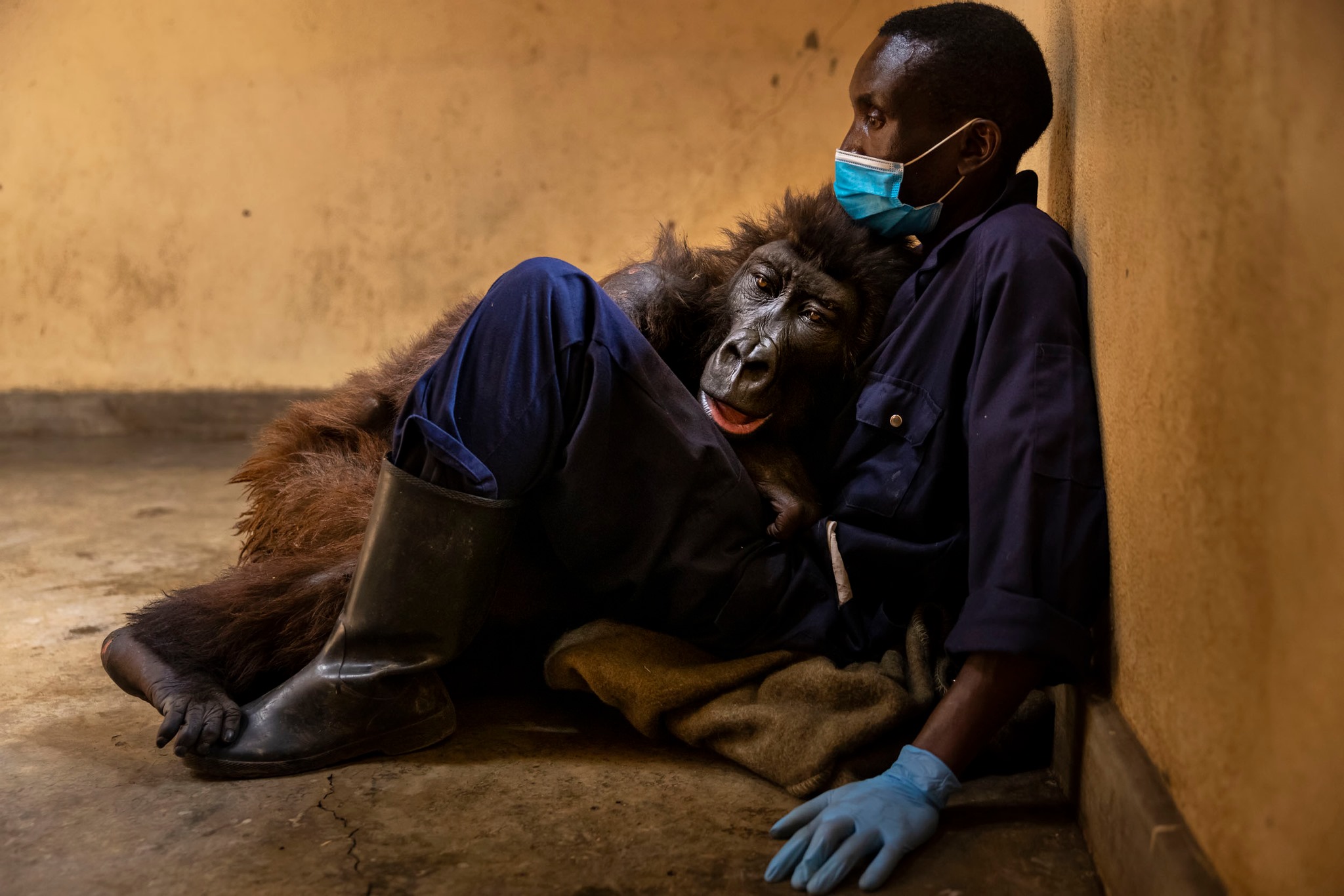 In 2007, an infant mountain gorilla was discovered clinging to the body of her dead mother, who had been killed by militia who were hunting for bushmeat. The two-month-old baby, dubbed Ndakasi, was whisked to safety by Andre Bauma, a ranger who became her life-long friend.

Ndakasi was brought to the Senkwekwe Center in Virunga National Park, where she stayed for the remainder of her life.

It is with heartfelt sadness that Virunga announces the death of beloved orphaned mountain gorilla, Ndakasi, who had been under the care of the Park’s Senkwekwe Center for more than a decade. On the evening of 26 September, following a prolonged illness in which her condition rapidly deteriorated, Ndakasi took her final breath in the loving arms of her caretaker and lifelong friend, Andre Bauma.

In a release from the national park, Ndakasi’s friend, Andre Bauma, commented on the impact the gorilla made in his life:

“It was a privilege to support and care for such a loving creature, especially knowing the trauma Ndakasi suffered at a very young age. One could say that she took after her mother, Nyiransekuye, whose name means “someone happy to welcome others.” It was Ndakasi’s sweet nature and intelligence that helped me to understand the connection between humans and Great Apes and why we should do everything in our power to protect them. I am proud to have called Ndakasi my friend. I loved her like a child and her cheerful personality brought a smile to my face every time I interacted with her. She will be missed by all of us at Virunga but we are forever grateful for the richness Ndakasi brought to our lives during her time at Senkwekwe.”

You can learn more about supporting gorilla conservation at this link.

Rest in peace baby, many thanks to the ranger who was her friend. Condolences.

I’m crying..she passed with her love..

I am crying too rest in peace sweetheart beautiful girl

What a sad and beautiful and uplifting story. I like that they were refereed to as friends and not just as a gorilla and her caretaker. What a wonderful relationship for both ot them and I know that Andre misses her a lot. I adopt a 14 1/2 year old schnauzer a couple of months ago and his name is Andre-he came with that name-and now I will see his name in a new light as he shares it with a very special man. We indeed must do all that is possible to save gorillas, other primates, and so many other animals from the horrors they face in a world a humans.

REST IN PEACE LITTLE ONE. BLESS THIS MAN WHO CARED FOR HER ALL THESE YEARS.

Rest in Heaven Sweet Girl :(( Many Condolences to the Ranger who cared for her. <3

God Bless the Both of you.🙏🙏 The Caretaker of this Magnificent Animal & the Gorilla who remembered his kindness & Love & chose to die in the arms of the man she truly Loved❤️.

My deepest condolences for the loss of the swee Ndakasi. Prayers to you to help you through this tough time. May God help you find another precious Mountain gorilla to take care of.

RIP Ndakasi, God Bless the Ranger who saved you and was holding you while you passed away.

Please make sure to view the link to the center that rescued and cared for this and other mountain gorillas – it is so important to learn about these places and and the amazing conservation work they do, and help support them if you can:

I thank you for caring for this beautiful intelligent animal 🙏❤️

I have always loved apes and their intelligence. I have always felt such a kinship with them. So very sad, my synmpathy and gratitude for loving her and protecting her, for her life.

So sorry for your loss