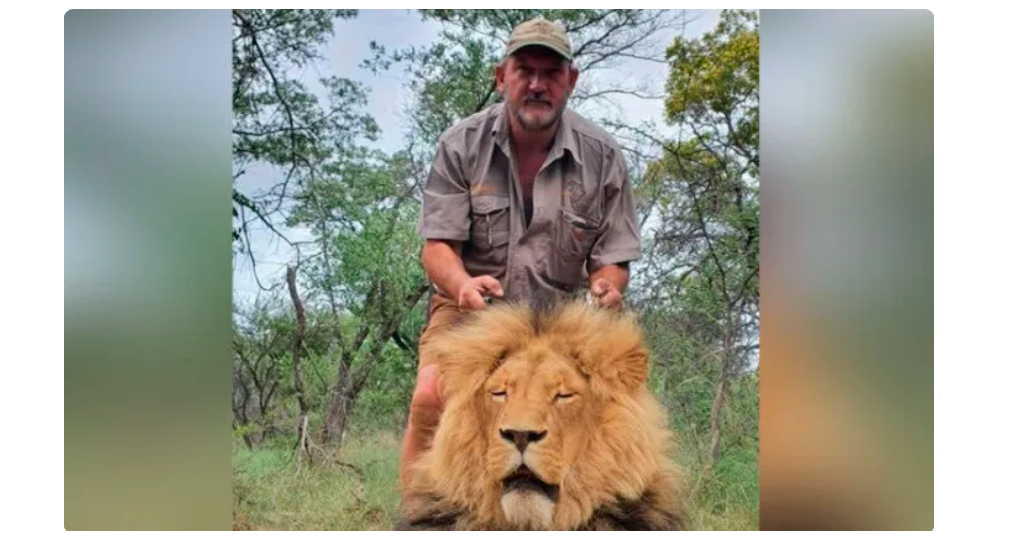 A 55-year-old man known for boasting about big game kills was recently found dead near his vehicle in Limpopo, South Africa. According to World Animal News, Riaan Naude was hunting when his vehicle overheated and he pulled to the side of the road. Someone in a truck allegedly pulled up to Naude’s vehicle and fatally shot him in the head before stealing one of his guns and driving away, reports the non-profit crime-fighting organization the Heritage Protection Group (HPG).

Last minute: The hunter, who killed dozens of wild animals, Riaan Naude, was killed in his car when he was hunting. He was found shot in the head in Limpopo, South Africa.

Though the motive for Naude’s murder is unknown, there is speculation that locals resented his high-profile killings of animals in the area.

Comments on the company’s Facebook page show many people expressing satisfaction that the notorious hunter was dead.

The authorities are investigating the murder.

karma is a bitch!

I’m sharing this news with as many people as I can. It’s about time one of these monsters got what they deserve.

Yes, I totally agree. This so-called “trophy”hunting must end NOW 🤬😢, it belongs in the history books, this is the 21st century for God’s sake. Glad this murderer is dead & got what was coming to him.

Sweet, in this case.

Sometimes these insane killers “knock at the pretty right door”.

Good news another monster dead,perhaps there is a God.

There is, and He is a just God.

Lol…….have fun burning in hell you loser! And may all the animals you killed be waiting for you to torture your weak ass!

May paradise have open doors for all his innocent victims, may hell wait for this insane subject!

Nah, the animals won’t have to see him again, but he’ll get tortured by somebody!!!

Feel terrible saying this but the planet is better off without someone whom causes suffering and harm for thrills. Wouldn’t wish this on anyone but certainly not about to shed a tear for him.

I totally agree with you. Anyone that gets a thrill to kill deserves what he gets!!

Oh, don’t feel bad for what you wrote. That POS deserved it 100%

Don’t feel bad. That’s exactly right. Animal abusers and killers deserve to be put down just like their innocent and defenseless victims.
The world would be such a better place if violent criminals were given the death penalty.

Good riddance!
Give his sorry carcass to the hungry animals for food!

Glory to the killer. Kill all trophy-hunting assholes

Can’t say I’m sorry about this, he gets what he gives!

Couldn’t happen to a better target!

Karma never fails. Good riddance to this horrible subhuman. May all the animals celebrate today.

Good was he stuffed and mounted?

I’m loving all these comments from compassionate animal loving decent peeps! My kind unite! This may make some wanna be “hunters” think twice about pursuing their murderous objectives!

later a-hole!!! Now you can tell God why you killed his most beautiful creatures for your own pleasure – dirtbag

not crying for this POS, sweet karma, rot in hell you bastard

Good riddance. Let’s mount your head on a wall.

Well, I cannot say that I’m grieving over this news. In fact, I think I’ll drink a toast to his assailant and his shooting skills!

Hunting is not as much fun when you’re the victim, is it. It’s a shame so many beautiful animals lost their lives because of that worthless thrill-killer.

To harm or kill an innocent, defenseless animal for fun is a terroristic act. NO TEARS FOR TERRORISTS:

Eye for an eye. Should happen more often. Harsher punishments results in fewer crimes. Once people start paying for unspeakable crimes other may think twice about being a better human.

Good. Love reading this kind of news. Ain’t no fun when the rabbit get the gun….

I feel no sympathy for the loss of the heartless man.

U got ur karma back real soon.Bad luck never fails. U get what u reap.

We all wish all the love, care and sharing the world with our friends.. the animals. We love their beauty. They have feelings of family and the joy of life.Let’s live with them. Not without them. He has experienced the sad killings he did onto others.. the poor animals. And to profit by selling hunting trips is a violation of the rights of animals to live and enjoy everything we enjoy as animals! It was time for him to stop and the animals to sing, roar and jump with joy!

Glad the coward was shot dead!

So glad this cruel bastard is dead. May he rot in hell

And just like that, the hunter became the hunted. Good riddance.

I love feel good stories like this!!! Universal Law, lovely to read Karma at work!!! Praying he suffered greatly!!

I’m absolutely delighted that this bastard is dead!!! Hope all the innocent animals you killed are waiting to rip you up really slowly & inflict as much pain & suffering possible lol
Rott in a shit hole you vile cunt!!!

Cold justice served! 👍Would rather have seen him hunted down by lions. Or a hippo.

I must be a bad person,because I can’t say I feel sorry for him.Maybe this is poetic justice?

You’re not a bad person at all. I wish him nothing but pain in his after life!!!

Great news … celebrating with a gin/tonic

Whoever killed this POS deserves a reward!! I only wish it hadn’t been as quick as a head shot, I would have enjoyed it more if he was brutalized and suffered.

I would have loved him to suffer in sheer agony and terror!! Like whoever killed him having shot him and seriously wounded him so he could not defend himself. Then tied him to the bumper of their car and slowly dragged him down the road bleeding. For the predators to catch his scent. Like the Lions or Hyenas. With him still being conscious and clear headed but suffering in pain, the animals avenger gets out of the vehicle at a safe distance from the predators,cut the ropes he dragged this subhuman murderer with and then drive a distance away. So he/she could watch the African Wildlife stalk and trot up on scumbag who sees them coming,struggles to stand,run or crawl away but can’t. Then Avenging Angel enjoys the show of the son of a bitch animal serial killer get ripped apart alive by the animals themselves!! KARMA!!! At least he is dead now. He will NEVER harm another innocent creature again!!! May everyone involved in his “hunting” business suffer the same if they don’t do a 180 NOW AND LEAVE ALL ANIMALS ALONE!!!! Whoever killed this demonic,piece of s*#t is a HERO!!!!

Brilliant, someone on the same page as myself. I’ve thought about the same thing ,minus dragging them behind the car bit. Mine was shooting them in the kneecaps then tying them to a tree for the predators in vicinity to feast on. Those abhorrent murdering vile scum deserve all they get. 😆 🤣 😂. Kama is a beautiful 😍 thing.

Now they need to shut down his organization too. He got Karma, now his employees & clients need to have Karma visit.

Yesss there is a GOD!

It’s time the hunters become the hunted, until every last one is dead…… The desire to kill innocent and beautiful animals is a perversion as sick as paedophilia.
It has to stop by any means possible!!

Got what he deserved!

Finally something in the news to bring a smile to my face.

I couldn’t be happier to hear he is dead. Congratulations to the man who did it, so stop your investigation. Please kill all trophy hunters you see. They are ruining your beautiful country

He had it coming! Good riddance.

He got what he deserved! Trophy hunting is a heinous act. Humans have no place in their territory!

Humans shouldn’t have a place in this world, it should just be the animals living on earth. Humans are taking the animals Lands and killing them off for their own gain. The animals would self regulate and there wouldn’t be any Humans to kill them.

Burn in hell !!!!!! Justice for all innocent beautiful animals is completed 🐾