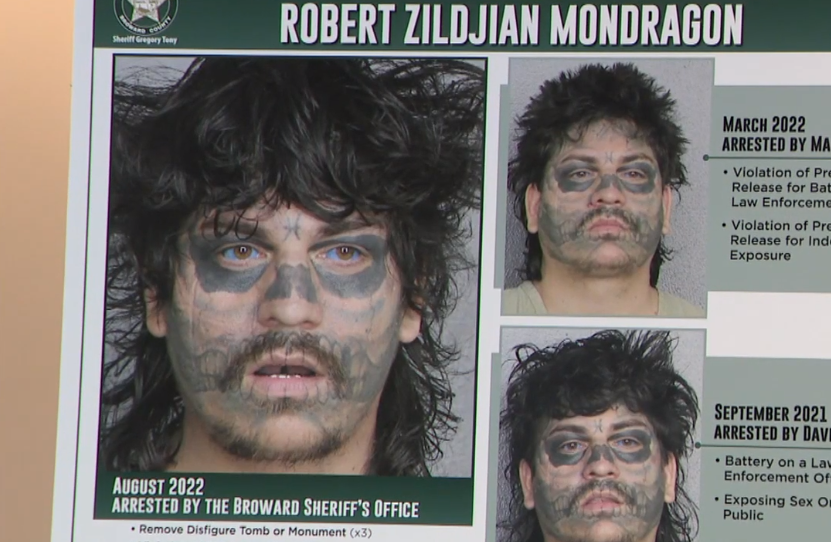 Parkland, Florida – A man described as “obsessed” with school shootings has been arrested after he left dead, mutilated animals at a memorial for the 17 Parkland school shooting victims. His name is Robert Mondragon, and the police believe that it is only a matter of time before he turns his violent tendencies to humans. 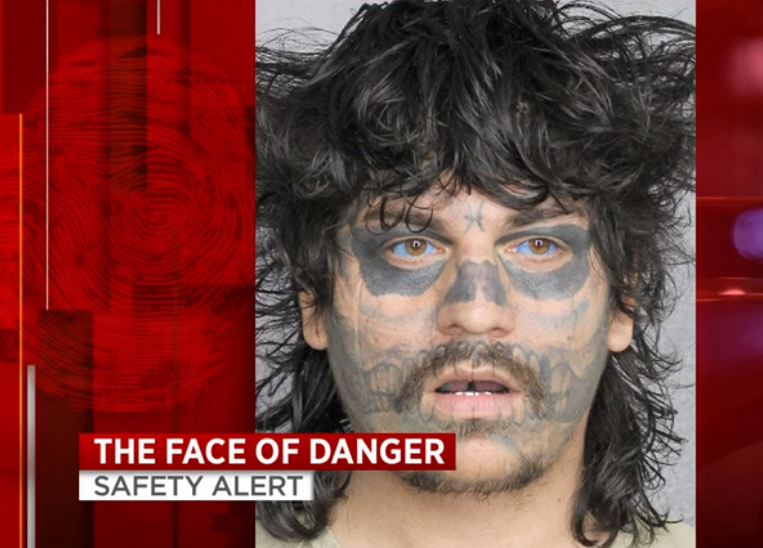 In a press conference, Broward County Sheriff Gregory Tony stated that the authorities want to keep the 29-year-old man behind bars for as long as possible. He is currently being held without bail on three felony charges of defacing a monument.

An investigation revealed that Mondragon has a “disturbing fascination with mass school shootings,” as well as real and fictional school shooters. In a release, the sheriff’s office stated that Mondragon’s facial tattoos resemble those of Tate Langdon, the character from the television series American Horror Story based on the Columbine High School massacre.

Mondragon has a lengthy criminal history. The current incidents that landed him behind bars involve mutilated animals left at the Parkland shooting victim memorial. On the first occasion in July, a duck with its chest cavity cut open was found on a bench at the MSD Memorial Garden. A day later, a dead raccoon was found on the same bench, and 10 days later, a dead opossum was discovered on the bench.

Mondragon was arrested on July 31, after a vigilant BSO Parkland district deputy saw a white Nissan Sentra with illegal window tint that matched the vehicle description from the surveillance video driving slowly in the area of Pine Island Road and Holmberg Road, and he conducted a traffic stop. The deputy said Mondragon was the only person in the car, and the deputy saw bird feathers and blood on the front passenger side floorboard. Mondragon told the deputy he had the dead bird in his car because he likes “the metal and blood smell that emits from the dead animal.”

Mondragon has not killed a person yet, but Sheriff Tony said that Mondragon “fits every classification that it’s coming.”

just look at this freak show. they should skin this clown alive like he has done to innocent animals

I couldn’t agree more with you.

Surely there is some way to keep this individual in a prison cell where he will not be a danger to innocent people before he becomes a mass murderer. Are the officials who make the laws waiting for Mondragon to become a mass shooter to try and justify more gun control laws that only make it more difficult for innocent gun owners to protect themselves & others from people like Mondragon. Mondragon is obviously a seriously mentally disturbed individual who needs to be in a prison for the criminally insane. We don’t need more so called gun control laws. We need laws that protect innocent people & lock up those who violate the laws and return the death penalty for those who commit heinous crimes and murder innocent people.

I totally agree with you!

OMG, what an absolutely worthless piece of sh1t. . . .Actually, sh1t is more worthy than this monster. I hope he’s stomped in the prison yard on a daily basis.

Disgusting. He is clearly psychotic. Even before he started hurting animals, just by his appearance we have a very obvious warning of the danger he poses. He has no place in the world and does not deserve to live. End him now before more innocent lives are taken.

FIRST PRISON — THEN A MENTAL INSTITUTION

Why isn’t he being convicted of animal cruelty? He’s the devil. Lock him up to keep children and animals safe. Don’t you get it? Are you just going to wait for thei dude to get better? Really

It’s also disturbing that he is only charged with defacing a “monument” and not Animal Cruelty!
Animals are living beings, monuments are things incapable of feelings.
I suppose they just want him in jail and there was no animal cruelty law for wild animals.
Laws need to be changed. There are far Too many disturbed people out here. It is a fact (backed up by FBI & scientific data) that serial & other types of murderers always start with animals. How do we keep these people in custody early before they start killing people w/o strict animal cruelty laws in such cases.
He is the poster child (man) for serious problems in the future.

You said it, Linda — The fact that this PSYCHO cruelly KILLED Animals FOR FUN fun is a huge factor — arrest him and throw away the key — he’s a danger to us all — ARREST the Idiot.

This is one scary looking psycho and I have no doubt he will escalate to killing and mutilating people at some point because killing animals will eventually cease to give him the “high” he needs so I sincerely hope reason prevails and he is institutionalized for life.

Torture the piece of shit and then kill him. He is a worthless piece of human garbage.

Don’t wait for him to kill any other animals or a person. People who kill animals should go straight to hell

I totally agree with you!

THIS MONSTER NEEDS PRISON!!! THEN A MENTAL INSTUTION! CLEARLY HE IS DEMENTED!!!!!!

Why is there no petition on him for arrest. He is killing and mutilating innocent animals.

There’s no rehabbing this one. He needs what everyone here is thinking but not saying out loud.

Unfortunately the law can do little at this time, because he has not committed a crime. As much as we hate what he has done to animals, this will not put him behind bars. However, couldn’t the state put him on a 48 hour hold and evaluate him and then once he is diagnosed as insane and a danger to others, have him committed until he is found to no longer be a threat. This would get him off the streets and give doctors time to proceed with as long of a commitment as possible, because he appears to be a dangerous sociopath.

That’s nonsense. Do you know how hard it is to commit someone against their will. Plus the fact that without a trial for some crime how and why would they prove he was insane.

if there were stricter animal cruelty laws this horror would be a crime. All of us need to demand stricter laws where we live for animals. Not only will it help animals but people as well. And you don’t know that it wasn’t a crime in that jurisdiction. It certainly should be a crime!!

What a ray of sunshine eh? I bet his parents must be proud of him…LOCK HIM UP!

I agree with a previous post “Mondragon is obviously a seriously mentally disturbed individual who needs to be in a prison for the criminally insane.” There may not be any professionals that can help him. In the meantime, he’s out free to do what he wants!! NOT OK!! He’s clearly a serial killer in development. He’s a lowlife trying to be important. The crimes he will commit might just make him “important.” He knows that and that’s why he’s wrapped up and stuck in his own dark space. POS needs to be away from society – however that happens is ok with me.

WOW…..if ever there was a case for locking up a seriously dangerous and demented individual then this is it. What will it take to remove “it” from society? More killings?

Let’s see how he looks after some real tough guys get him alone behind bars. He is a danger to the community so a maximum sentence behind bars is a necessity !

The fact that this PSYCHO cruelly KILLED Animals FOR FUN fun is a huge factor — arrest him and throw away the key — he’s a danger to us all — ARREST the Idiot!