Horribly Injured Puppy Was Euthanized After Being Abandoned In A Bag 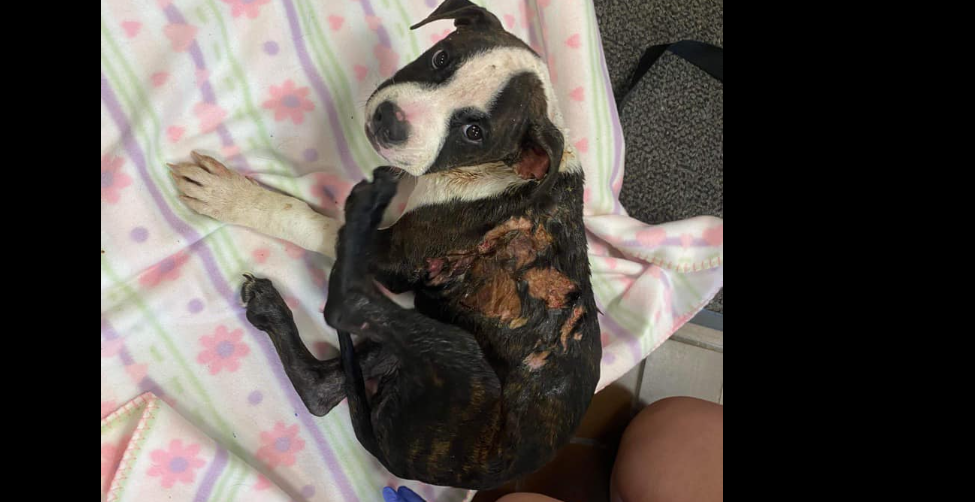 Olean, NY – A puppy, discovered abandoned in a bag in Limestone, New York, on August 21 was so badly injured that he had to be humanely euthanized. According to the SPCA in Cattaraugus County, the injured puppy was found at 2165 US Rt 219 in Limestone, and troopers were notified because he was in such poor condition.

The animal welfare agency said that an exam revealed extensive injuries, including severe burns and infection across much of his body. He had a broken femur from being shot multiple times and was in kidney failure due to malnutrition. Humane euthanasia was recommended by the veterinarian due to the extensive injuries and immense pain that the puppy was in.

The agency is hoping that a member of the public will come forward with information about this puppy, and the cruelty case. The shelter writes:

If anyone has information regarding this puppy (male, approximately 3 months old) or may recognize him please contact the SPCA at 716-372-8492.

there isn’t enough pain for the scumbag that did this to suffer. i hope his demise is slow and painful just like that of this innocent pup.

I cannot print what I’d like to do, to the piece/pieces of human excrement who did this!

i agree. you have to ask though was everything done to save this pup. while i am sure he was in pain and had obvious injuries he looks healthy. you can’t tell by a photo but i would bet that when the cost of saving him was factored in they chose to kill him instead. we are seeing more of this in both animal and human care. many of these doctors and nurses have seem to lost their empathy and compassion and replaced it with opinion, politics and greed. forgetting their oath to save every life to the best of their ability. it is a shame what humanity has become all across the board.

I’m wondering the same thing but he was in kidney failure from being starved.

This is exactly what I thought. Just look at his face, he would have made it. I guess they thought he wasn’t worth it.

They just didn’t do enough for this poor baby

I agree, but maybe the compassion was there in that multiple surgeries would have been hard on his little body and that’s why they chose to euthanize him. While I am 100% for doing everything to save an injured animal but if the risks, recovery and not a guarantee it will work are factored in, then I would probably want to quickly end their suffering. Still very tragic and I hope the POS is found.

Sounds good to me.

Jfc! That poor dog spent almost his entire life being tortured! What is WRONG with the human race?

Too much to detail here, suffice to say that the human species has descended into a place that is indescribable. The worst species ever – time for it to be eradicated.

All the human race is sick

I hope they find them with fingerprints or DNA evidence. That sweet puppy deserves justice. That monster deserves death.

I pray someone comes forward and does the right thing. That poor baby had three months of hell. I do not know if people don’t have a soul, or what they could possibly be thinking. If they can do this to an innocent baby person, a human is next. This is heartbreaking and disgusting. We are supposed to help things that can’t help themselves, not hurt them. Someone knows who did this.

I would gladly serve justice here and it would not be pretty. I have to agree that this piece of dreck should suffer immeasurably. Pure sadism. Sometimes I just can not find the right words or it would just take too long to say what I think. Once upon a time I thought I could never hurt another person but years ago when I started doing animal rights in various ways I realized that was no longer totally true.

I agree with u, they feel pain, know they abandonment & not loved.

Another pitbull type pup being abused by a lice infested evil puppy torturing, scumbag, subhuman, puppy killer.
Yes, somebody knows who this thing is. Start a reward fund to who will bring him to justice, dead or alive.
I will gladly donate.

That puppy in the photo had life and should’ve gotten a chance to live. I believe it deserved a chance instead of being euthanized. It is sitting up and looking into the camera and I can’t be convinced you people could not have given treatment before you just decided to euthanize it.

I pray who did this will be found and prosecuted to the fullest extent of the law, and then this case used to increase the sentence for such crimes in the future. I know a reward will do wonders in getting tips…

FIND-ACCOST/SADISTICALLY TORTURE/MURDER THE SATAN TRASH THAT BRUTALIZED THIS POOR BABY!!! CAN I PLEASE SIT AND WATCH THIS MOTHERFUCKING ANIMAL ABUSER SUFFER/DIE??? IT WOULD GIVES ME IMMENSE PLEASURE!!! 💪🇺🇲RENEE CARIGLIA

Why? The puppy’s vet bills could have been paid cod by raising funds. I’ve seen far worse situations on cuddly. It’s a shame they just gave up. I would have contributed to care.

I’ve seen terrible cases too but this poor puppy was in kidney failure and there isn’t much that an be done for that. This case is so disturbing it’s hard to think about it. I pray that the criminal coward is found and receives the harshest sentence possible. What this pathetic innocent endured is unimaginable. I take comfort in knowing he is in /God’s hands now; never to be hurt again!

What is wrong with people? To do such harm to an innocent baby animal is appalling and heinous! There is a soulless devil walking around out there somewhere, and I hope this person gets what’s coming to him, and hopefully it will be painful!!

Did they find any cameras or videos? Should have done a DNA on the bag and maybe the dog? Humans are screwing up animals lives. If you can’t treat them right, then leave them alone. Felony charges are good for these animal abusers, give them every inch of the law, they deserve to pay their debts.

This poor innocent puppy suffered immensely at the hands of a sick, barbaric deranged scumbag who needs to be dragged behind a truck through rocks for hours!! My hope is someone will recognize this pup and report the POS so he can get tortured til death!!!!

Put out a bench warrant for their arrest. He’ll do it again, and maybe next time someone’s child. He is a danger to society!

Surely this is a serial killer or a wanna be. He must be found & hung from the highest tree before this next victim is human, if not already.

Disgusting horrible non-human psychopath , who feels NOTHING when harming or killing another living soul!!! Find him & sentence him to the max penalty, then place him/her in the “system” with animal lovers! POS!!!!!! Same should happen to YOU!

Do the same to that worthless piece of human shit.

What the hell has become of a supposed civilized society?? Satan has taken over and he has many cohorts as evidenced by this crime. Time that justice starts being served for these heinous crimes that is happening all too often. Time for serious jail time or this will only continue.

looking at this pup i would say he was absolutely able to be saved. he is up and alert. it looks like he was scratching his face in the photo.they would have lost nothing by trying. it would have probably required expensive intervention but how can you look in those eyes and take the life from them. i wish i had the ability to do what a good vet can do. i would gladly donate a great deal of my time helping shelters and people who can’t afford to help an animal they love. yes it is a business but you can still make money and be compassionate too!

i also contacted the shelter that had this dog. i don’t live that far from them and questioned them about his care. needless to say i never received any response so that pretty much verifies my thoughts on this. what a shame.

NOW THERE IS A PITBULL ON DEATH ROW FOR 15 MONTHS FOR TWO BITES SO WHY DONT SO CALLED HUMANS GET THE JAIL OR DEATH…… FOR ALL THE PAIN AND SUFFERING THIS INNOCENT PUPPY SUFFERED……..