Hikers Discover Mother Dog And Pups Abandoned In The Desert 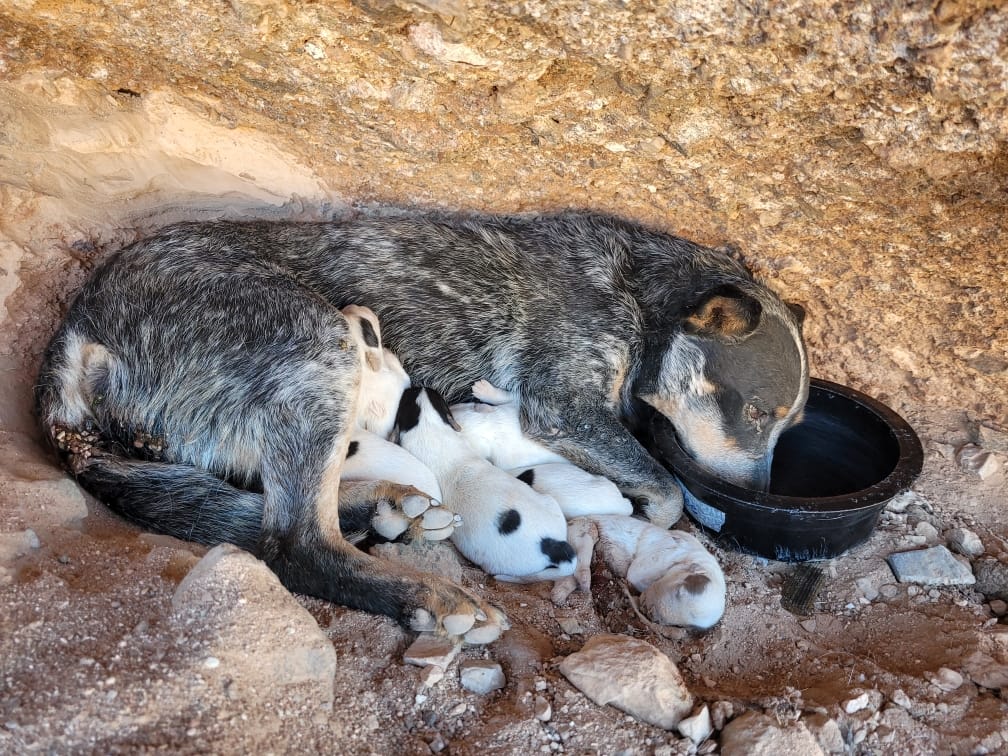 Nevada – Days ago, hikers discovered a family of dogs who appear to have been abandoned in the desert near Las Vegas. According to the Southern Nevada Animal Rescue League, the mother dog appears to have given birth after she was abandoned; by the time they were discovered, two puppies had already died. On the day the dogs were found, the rescue agency said:

EMERGENCY SITUATION⚠️⚠️‼️
This morning some hikers came across a family of cattle dogs abandoned out in the desert. It seems as though mom delivered the pups while out in the desert. Two puppies were already deceased when help arrived, 5 still alive but not out of the woods as the desert nights are near freezing in temp. We hope we got to this family in-time.

As reported by 8 News Now, a male dog actually led the hikers to his family. And he was thankful that help had finally arrived, licking the rescuers’ faces to show his gratitude. It is a miracle that any of the dogs survived given the frigid night temperatures and the presence of desert predators.

The male dog is already in a foster-to-adopt home, but the mother and her newborn pups will not be ready for approximately eight weeks. If you are interested in adoption, you can complete an application at this link.

Find the rescue group on Facebook at this link.

We try are the most dangerous and invasive species on the planet.

What does this mean?

Praying for these dogs. So thankful that they were discovered.

Humans are such a threat to companion animals. What “scum” would abandon a pregnant dog in these freezing temperatures; heartless, unconscionable and unnecessary as there are other means if the dog is unwanted….i.e. give to a shelter. I hope this “scum” is found and held accountable for animal abuse.
Thank you for rescuing this family. What smart male dog to lead these hikers to his family for help!

I feel the criminal justice system seriously fails in punishing the people who commit such horrific crimes. I praise the Judges who give out real sentences and take time to really recognize how sick and disturbed people really are to animals . They need REAL LAWS MADE and they need use them To get these dangerous and twisted people off the street .Their very sick and shouldn’t be around any animal or person..Thank God for rescues and people with good hearts and compassion.Im sorry the 2 pups died but am thankful to the hikers and all those who saved these precious lives..I hope they find who did this , such senseless cruelty ..my opinion

So true Nancy. There are many ways to give up a dog or puppies rather than abandonment. These people need to live the way they attempted to make the sweet innocent lives they disgarded.

Thank you to the hikers, who could have ignored their find, but thankfully, they had loving hearts and stepped up to help the mama and daddy and puppies. And Thank you to the rescues who stepped into help. God Bless you all!

There ARE some good people out there helping the voiceless but the deranged bastards that could leave a pregnant dog in the desert should die like they wanted her to do! If caught, hung by their tonsils! We don’t need more scum living amoung us!

Very well said. I agree with you!!

How can anyone do this to a pregnant innocent dog. So glad the family of dogs was rescued. People who do this to dogs deserve a special place in hell.

God is watching us every second of the day. The person(s) who chose to do this to an innocent pregnant dog & her BFF think they have been relieved of their responsibility of these lives. They will find out in just time they have not. When they least expect it, they will suffer consequences. We all reap what we sow. Dog=God spelled backwards. God sees ALL. These hikers were led by the hand of God Almighty & daddy dog led the way. God bless these caring compassionate rescuers. Your rewards are forthcoming.

Another bizarre and irrational explanation for a cruel, heartless, cold-blooded act by horrible people! So God sent someone to save the dogs, but allowed someone to abandon them in the desert, where 2 of the innocent puppies died? Think about what you’re saying!!!!!!!!!!!!

I’d like to do the same thing to the scum who did this..drop them off in the middle of nowhere and let them see how it feels.

I’m so glad this little family was rescued. How people can live with themselves after doing such a cruel and inhumane thing to innocent dogs is beyond me. Hope karma bites whoever did this in the butt so hard, they never recover!

GOD BLESS THE DOGGY FAMILY, THE HIKERS, AND MAY THE FU KERS WHO ABANDONED THE POOR ANIMALS DIE A LONG, SLOW AGONIZING DEATH!!! RENEE CARIGLIA

Find the PSYCHOS who abandoned the Doggies — they belong in rubber rooms — they’re a danger to society.