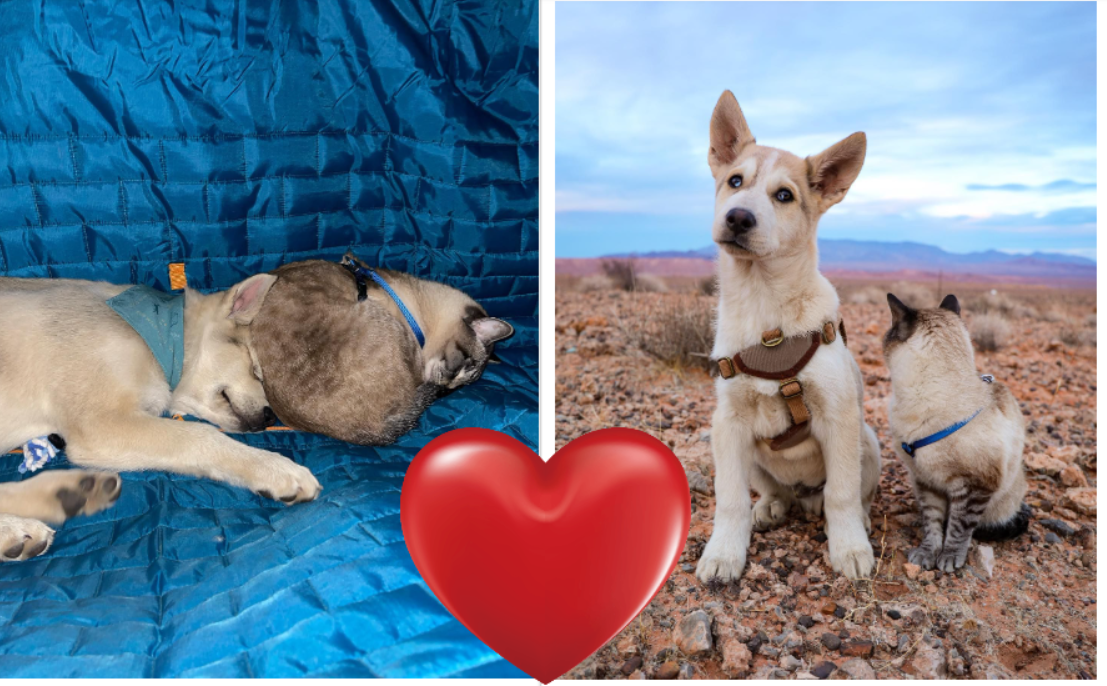 Weeks ago, thousands of people who followed the endearing antics of Henry and Baloo via the Henry the Colorado Dog social media accounts were devastated to learn that Henry had died after a short battle with aggressive cancer.

But nobody was as heartbroken as Henry’s best friend, Baloo. The cat was more than sad, he was broken and it was taking a toll on his health. On April 13, his family described the depth of his despair, writing:

Baloo Update: lil B is not doing well… he’s completely devastated and it’s starting to affect his health. It’s the most heartbreaking thing to watch him pace from window to window crying, searching for his Henry and when he can’t find him he’ll hide or bury himself under things. We’ve been taking him outside to show him Henry’s not here anymore and been going on mini adventures, but all he wants to do is go back home to look for Henry. He won’t play or eat and has lost a couple lbs (which is a lot for him since he normally only weighs 11-12lbs). We knew B was going to grieve, but we weren’t expecting this. He just misses Henry so much 💔

Baloo’s owners, Cynthia and Andre, had considered adopting a rescue puppy before Henry went downhill, but when he got sick, they put off their plans. But when faced with Baloo’s deep depression, they decided to visit a litter of rescue puppies to see if there was one that might help Baloo heal.

In the same April 13 social media post, his family explained what would be happening.

We don’t know if we’ll come home with anyone, it’s completely up to Baloo. So we’ll have to see. We’re really, really, really not ready.. all we want is our Henry back, but if it will help Baloo and that it’s clear B wants a friend, we’ll take the plunge into welcoming a new member into our family. No one will ever be Henry, not even close, but maybe a furry one can help all of us.
We’re taking Henry “with us” so he can be close by through every step of this journey. I’ve clipped a Polaroid of Henry’s smiling face to the visor in my car and we brought a few more special things of his.

Four days later, a special announcement was made – Baloo had found a friend named Pan. Though his humans were not quite ready, Baloo was – his family explains:

Hey everyone, meet Baloo’s rescue Puppy, his name is Pan ❤️
Saying that this was hard is an understatement. The decision itself and posting another pup’s face on this account is more painful than I thought it would be. We’re not ready.. we might not be for years, but this was the best decision for Baloo.

Baloo is eating again and he even played!! He’s no longer crying all day and running from window to window looking for Henry. He’s actually having happy moments now and I can’t stop crying. I balled when they snuggled (the last pic) and told Andre that I thought I’d never see Baloo like this again. That I didn’t know if we’d ever be able to help Baloo even be as close to as happy as he was with Henry. Which he might never get that, but maybe he can get close. We think he’ll grieve for a long time, it’s still clear how much he misses Henry, but we’re grateful that Baloo can find some peace having a furry friend to lean on. Which is why this is Baloo’s puppy.

Out of 11 puppies available for adoption, Baloo was immediately drawn to Pan – his owners believe that Henry may have helped guide them to their new family member:

Who knows maybe this was fate and Henry was guiding us the whole time. I know he would have never wanted Baloo to be this sad and lonely.
Thank you Pan so much for helping our lil Baloo. He really needs you right now and we’re finding more and more that we do too. If only you could have met Henry… you would have loved him just as much as we do. We love you little buddy and welcome to our family.

Read the prior article about Henry’s passing at this link.

I commend the decision to get a puppy for Baloo and I understand how hard it was to do. I had a very hard time when my Cattle dog died and almost a year to the day my mini wiener died. I am pleased that Baloo is happy again and I know that Pan will make everyone smile.

Animals are anything but the “things” most people think of them as; they are deeply soulful beings who are amazingly loving and devoted once they are given a chance to be who they are, meaning in a responsible home surrounded by love, and safe. This goes for ALL animals, not just those considered as “pets.” Thank you for sharing this heart-wrenching, beautiful story. God Bless all animals and the people who truly love and respect them. That would surely rule out dog breeders and other such wastes of life.

So happy you have a new pup for Baloo. It’s all so sad and heart breaking , that Henry passed. What a sweet dog. You need to focus on what’s best for Baloo. I wish you all the best of luck with your new dog! ❤