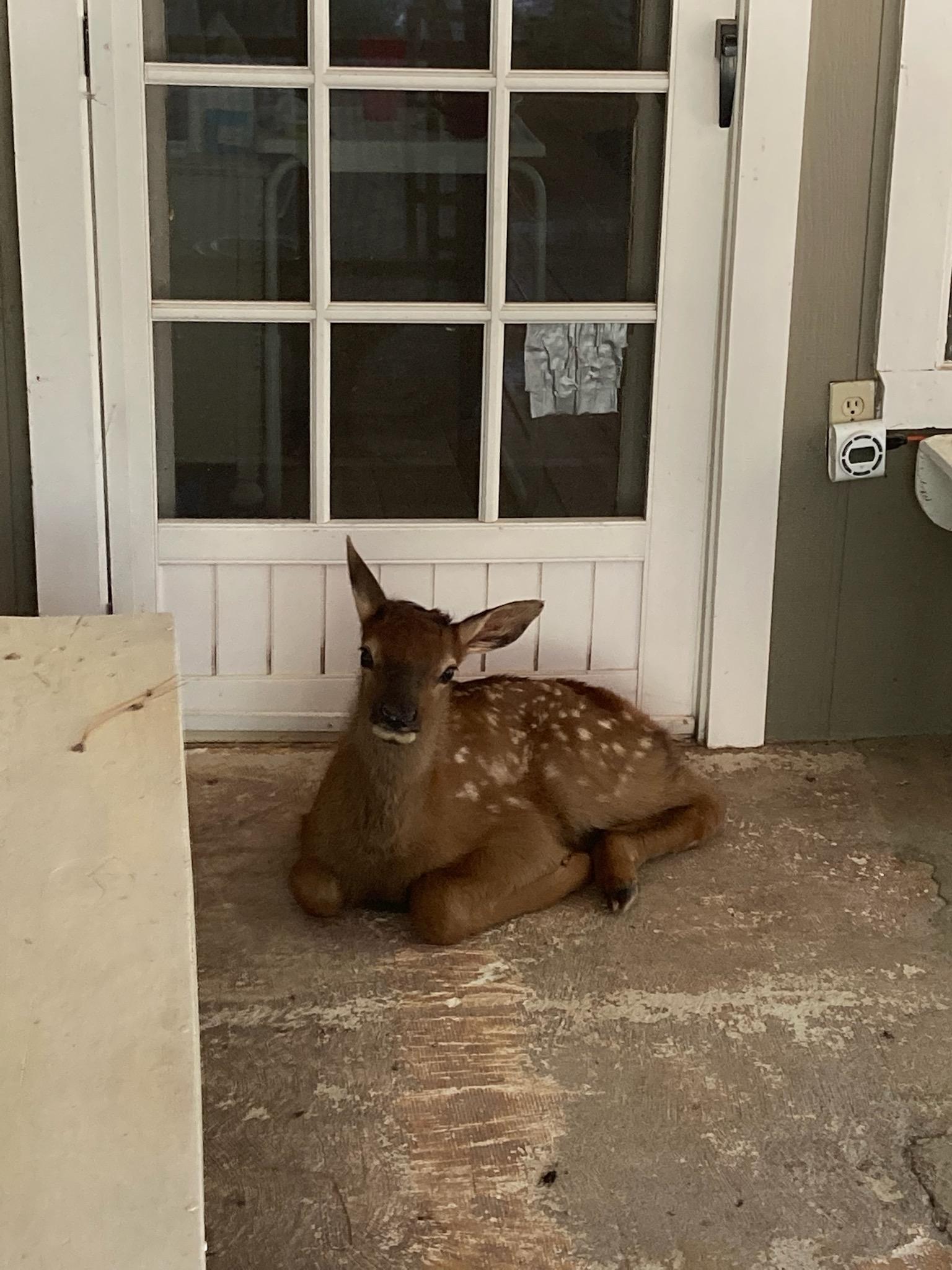 Pine, Arizona – Last week, an Arizona homeowner encountered a rather unusual visitor on their porch.  According to the Arizona Game & Fish Department, a mother elk had left her calf on the Pine resident’s doorstep.

Fortunately, the residents did the right thing and left the calf alone, choosing to call wildlife officials for advice about the proper way to handle the situation. The agency explained what happened:

Although calves are usually left in a more natural setting such as a grassy meadow, the responding AZGFD Officer jokes, “Mom left it there for ‘daycare’ in the early morning, and came back to pick it up after lunch”

The agency used the rather comical situation to remind everyone that calves should be left undisturbed if they are found alone, explaining the problem with reuniting calves who have been moved by people with good intentions:

It is usually difficult to reunite them with their parents in these cases. In addition, a cow elk watching from a distance may become aggressive when defending her young, which can quickly put those with good intentions in danger.AZGFD urges Arizonans to leave baby wildlife – including elk calves – alone.

Advising of the proper protocol if an animal is sick or injured:

If you encounter an animal that appears to be sick or injured, is unresponsive or lethargic, please contact your nearest licensed wildlife rehabilitation facility or call your local AZGFD office first.

Glad you left the animal alone. You did the right thing. Thank you babysitter.

Smart people to not interfere. They got to enjoy the presence of this calf while doing the responsible thing.

BLESS You for leaving this Sweet baby alone so Mama could come get him later!
You all rock!

I wonder what the going rate is for Calf day care!

How do they know it was the mother of the calf who left her. Did anyone witness
The calf being left? And i dont think its funny at all, only someone ignorant enough would leave such a comment

It is stated the Mother came back to claim baby.

What if the mother of the calf doesnt claim her calf, then what is Arizona Game and Fish planning on doing with the calf. I would like to know. Do they have a follow up plan or are they too busy selling hunting licenses? Informed people know thats how fish and game make most of their money.

Why don’t you contact Az F&G and ask what their alternate plans are in case a mother does not return?

What a cutie. I’m glad this baby was reunited with it’s momma and all went well 💕

Nice to read about people that did the right thing for an animal. The horror stories we read about are heartbreaking. Such a beautiful baby too!

Thank goodness you knew the correct thing to do so Momma & Baby would be back together again.

So happy you ou left her alone and just watched her. Deers leave there young close to homes to protect them from predators.