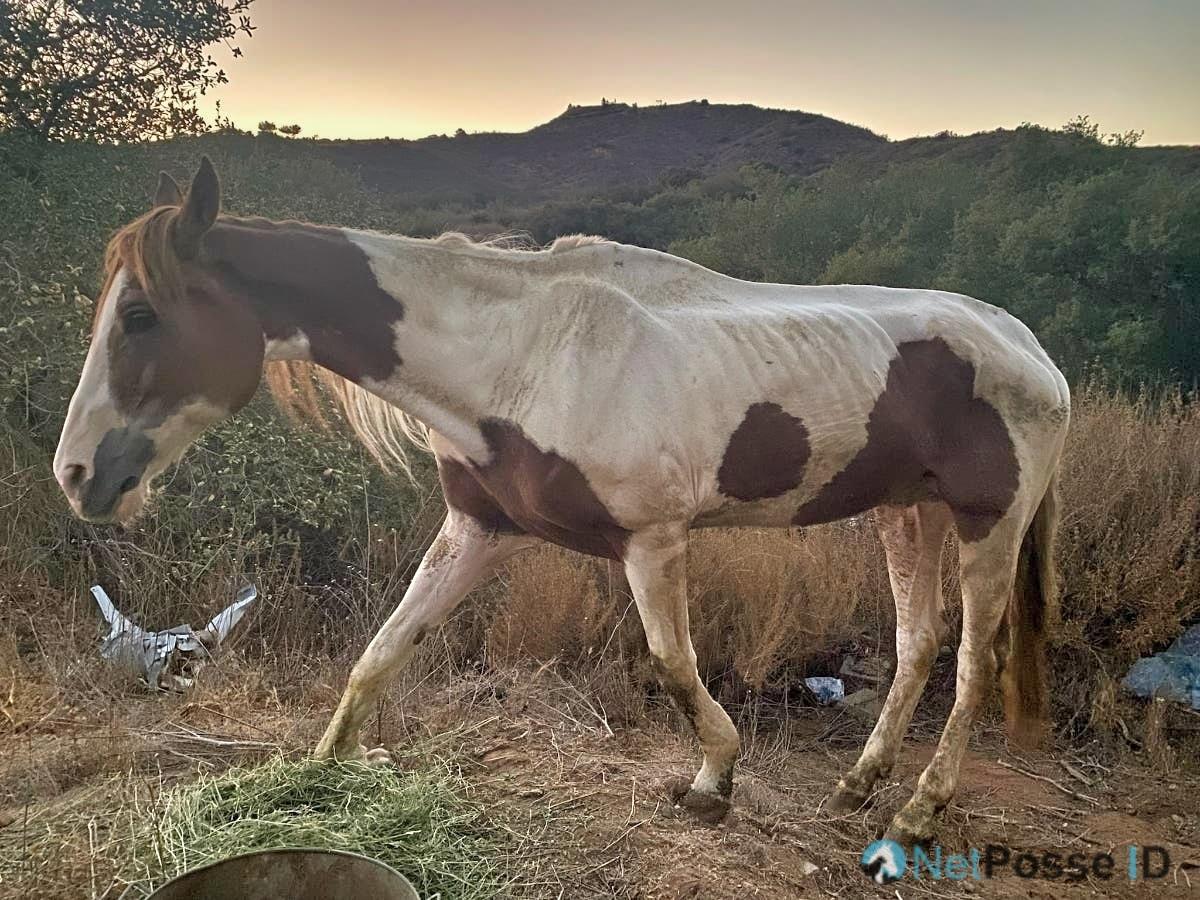 Efforts are underway to find the owner of a horse who was abandoned in Riverside County, California, near the Ortega Highway, west of Lake Elsinore on Monday, August 9. The 5-to-7-year-old horse was in such poor condition that he had to be humanely euthanized.

According to NetPosseID, the Riverside County Department of Animal Services is working with officials at Animal Friends of the Valleys in checking to see if there have been any open neglect cases.

Riverside County Department of Animal Services reached out to the public for assistance:

Friends, we’re seeking any information anyone might have regarding an abandoned horse near the Ortega Highway. The horse was discovered along North Main Divide Road, less than a mile from the Ortega Highway. The abandonment likely occurred Monday (Aug. 9), possibly during the afternoon. We were alerted later Monday night by a Good Samaritan. We’re hoping someone might have dashcam video of a horse trailer/license plate being hauled in that area — or might know who owned this unique equine, a sorrel and white paint horse. The horse, a male, possibly between 5- to 7-years-old, was in horrible condition. His body score was a 1 or, simply put, severely neglected. We were forced to euthanize the animal due to its poor condition. We will be working with our counterparts at Animal Friends of the Valleys to check if its officers had any open neglect cases.

Anyone with information is asked to email the animal welfare agency at shelterinfo@rivco.org

I hope the person that abandoned the horse is found and sent to prison plus has to pay for the rescue and euthanasia of this horse.

I hope this abusive and cruel person is found.

REST IN PEACE SWET HORSE! )-: FIND THESE PEOPLE AND CHARGE THEM BIG TIME, SEND THEM TO JAIL FOR A LOOOONG TIME, LET THEM SUFFFER IN PAIN, ALONE,LONELY AND SCARED, FOR A LOOONG TIME! THEN……….

I CALL B.S.! I’ve seen horses look a lot worse than this one and they lived. They just didn’t want to be bothered with finding a sanctuary to take him, to much paper work. A–holes. Riverside shelter euthanizes pit bulls left and right too.

I agree totally.Lots of horses in worse shape then this who cannot even get up manage to survive.A little TLC goes along way.

I thought the very same thing

They should not have euthanized that horse ! Many others were saved in the same condition.

Your reply is pointless at this point, unless you know specifically about the condition of it.😿

why euthanized? we have worse cases in argentine and never kill them!

These kind of humans are very very sick!! How can you do this to a beautiful animal??? Barbaric Cruelty!!!

God, this makes me sick. If you can’t take care of an animal then give it to someone who can. What is wrong with these sick idiots?

This is why Its so important to have a worldwide animal rights and protection law. As long as there is no animal rights and protecting law worldwide humans should be deeply ashamed of themselfs for not helping the animals. Humans who treat animals like garbage and treat them like crap don”t deserve the light of day themselfs even don”t deserve to be called human. Humanity starts with caring for ,saving and protecting the most innocent creatures on the planet.

Please find the owner of this poor defenseless skinny horse…Obviously, was tortued and abused (by not giving proper food & water) and send them to Jail…Period!

I sure hope they can find the person who did this, if not, I will pray Karma will kick them in the butt.

I hope the owner burns in hell !

Whoever did this to that poor horse needs to be found and punished severely! Animals are NOT throw aways when you’re tired of them or don’t want them anymore. There are some sick, stupid humans out there

I don’t understand why he was euthanized

Some humans are evil .

Rot in Hell whoever did this to this beautiful horse!! MF

I don’t know the whole story but I have seen horses in far worse condition than this that were given a chance and made it. I feel you could have at least tried to save this beautiful creature

Need to charge the owner for neglect. U no the animals will start showing the neglect ion. Too bad had to kill the horse for his selfishness.

Hope the person responsible for abandoning this poor horse gets DEATH PENELTY!!!

Punishment to the max

To abandon any animal in a harsh environment where it has no chance of survival is a heinous crime; to abandon a seriously malnourished and neglected animal in these conditions is worse than that. I hope the person responsible is brought to justice and punished with a long goal term. I agree that this lovely horse did not have to be euthanized and it is time this questionable veterinary practice is looked at seriously for what it is – killing the animal by poisoning it. This horse deserved a chance to get better. I have seen animals that have survived shocking injuries and illnesses through careful veterinary treatment. It is not clear to me why this poor horse was not given a second chance at life.