Dog Who Famously Rode Metro Bus Alone Has Passed Away 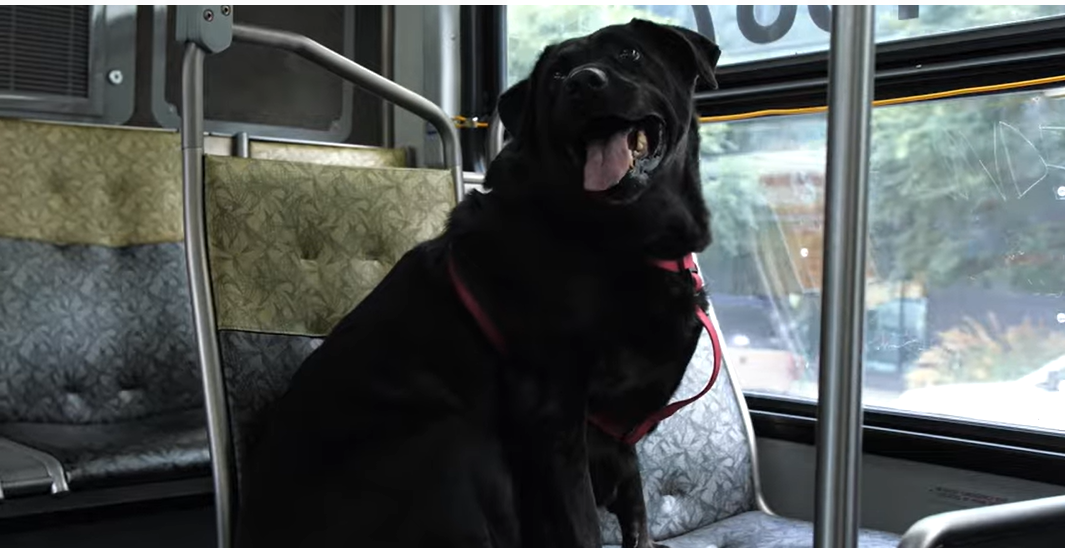 Seattle, WA – A Labrador retriever mix named Eclipse, who rose to fame for her ability to take the city bus to the dog park all by herself, has passed away. The beloved pooch had over 123,000 Facebook fans, and on Friday, they learned that she had died in her sleep that morning.

Her owner, Jeff Young, had recently said that Eclipse had “cancerous tumors.”

Eclipse was a super sweet, world-famous, bus riding dog and true Seattle icon. You brought joy and happiness to everyone and showed us all that good dogs belong on the bus. 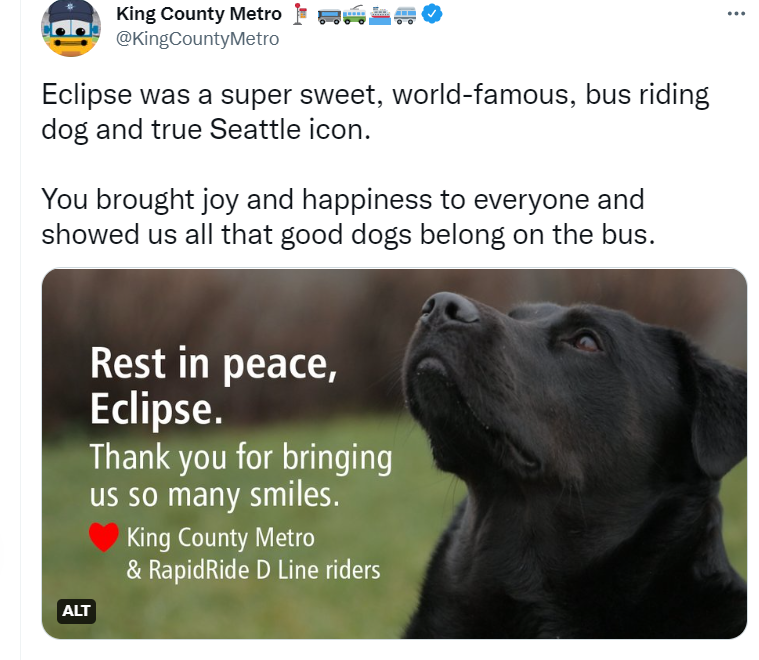 So how did this smart pup learn how to use the bus on her own? Eclipse and her human always took the same city bus to the dog park, but one day he was running late and she got impatient. According to Young, she ran off, boarded the bus that they had always used, and successfully got off at the dog park.

Fortunately, Young knew precisely where she had gone.

Eclipse mastered the bus system and became a regular, solo passenger. Area residents fell in love with her sweet personality, and King County let her have her very own bus pass.

The Seattle days will be a bit drearier now that Eclipse is gone. Rest in peace sweet girl.

Rest in peace Eclipse, you will obviously be missed by a lot of people. Commiserations to your daddy. xx

Rest In peace precious girl. You were truly an intelligent and incredible dog. ❤️🙏🐕

The Lord is now showing you the beauty of heaven. May you always know that you were Seattle’s love.
Rest in peace 💔
Father Douglas Michael ✝️
Wallingford, PA.

Awe so sorry to hear that. She sounds like she was an awesome doggie,

RIP… you were a super, precious and incredible girl!

R.I.P. Eclipse. What a beautiful creation of God you were. May your daddy find comfort in knowing you were so loved by so many.

awwww… what a sweet but sad ending … im sure she will be greatly missed by all that road that buss….R I P GIRL….

Dear Jeff, I am so sorry for your loss of your beautiful Eclipse. She was the sunshine in so many peoples lives and was dearly loved by everyone. She will always be with you and watch over you (and her hundreds of friends) from Heaven.

What awesome beings dogs are. Rest in Peace Eclipse 💜

This is an adorable and incredible story, I a sorry for her owner Jeff and all who knew her in Seatle. RIP Eclipse, you are one in a million. P.S Hopefully they have a bus for you to ride,,, over the Rainbow Bridge

i got to meet you one day to my utter delight i saw you saunter off the bus as i live a block away from your dog park. You are amazing and will be missed! peace and ﻿LOVE!!

I’m so very sorry to hear this. How sad for her family and all the people who enjoyed her company on the bus.

We’ll all miss you beautiful.

So Sorry to hear about your passing Eclipse….Say hi to my furbabies after you cross that Rainbow Bridge