Lakebay, Washington – Deputies in Pierce County encountered an unusual situation last week when they were called out to capture a nearly 7-foot-long alligator who was living in a shipping container with a man. 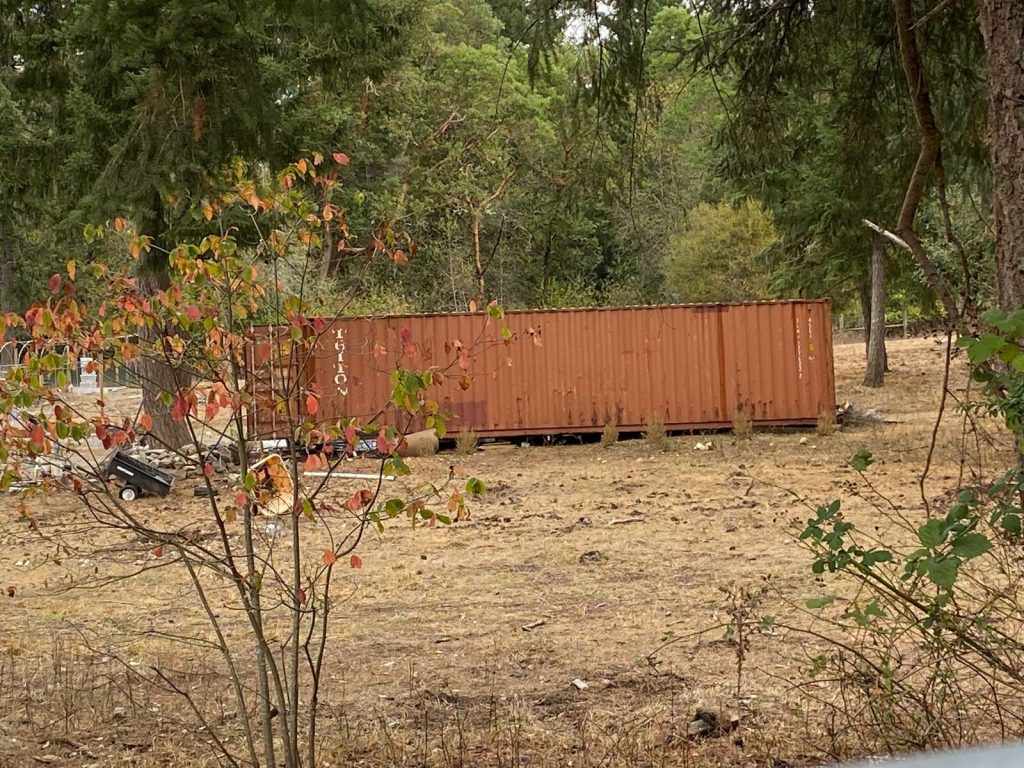 The sheriff’s office shared the strange situation via social media on Wednesday, explaining that the animal control agency had received a complaint alleging that someone was living on property in Lakebay with an alligator. The agency described the situation officers were met with, writing:

On 10-20-2022, animal control visited the property and saw the alligator which was being stored in a small tub inside of a shipping container. Also in the container was a very sick calf (baby cow) and a mattress for the 32 year old owner to sleep in the container with the animals.

“The back half was a little living room and mattress on ground where the man was sleeping and it was free access for the gator to come in and out of the tub next to the man.”

A day later, officers returned to the property with a search warrant in order to check on the calf and seize the alligator, dubbed Al by the authorities. But the calf, and the man, were gone. The department explains:

The calf and the owner were gone, but “Al” the alligator was still home.
Animal Control did the hard job of getting Al out of his tub and holding him down. A deputy assisted with taping the mouth closed (that’s a big NOPE).

The mission was a success. Al was transported to the Tacoma Humane Society where a wildlife rehabilitation sanctuary met with them to take custody of the gator.

Friendly reminder for the curious, alligators are illegal to own in the state of Washington!

The calf should have gone to sanctuary, too.

The calf was not there when they returned. S/he certainly should not be with the man as s/he was sick and must be miserable.

Alligators do not belong in shipping containers nor do they belong in Washington. I wish he had left the calf as well because that poor little one must be miserable being in the poor state s/he was.

Oh hell no. I’m not living anywhere near and/or with an alligator. No thank you very much. I am very concerned for the welfare of that calf. That man has a voice, he has options, that calf does not and is at the mercy of this person.

this is not a “cute” :funny” story, clearly we have a mentally unwell person and two abused animals, Nothing cute about this.

Nowhere in this article does it state that it’s a “cute” story. I bet you were probably directed here from one of those “Dodo”-like sites, weren’t you?

What the hell is wrong with people????? Leave these wild animals alone and let them live in peace in their own environment! Take these idiot people and lock them in cages in a zoo somewhere. Wild animals do not belong in captivity!

Hate to say it but it’s possible the calf was intended to be food for the alligator. Hope they find that baby safe and prosecute the idiot.

That was what I was concerned about also. Poor calf

all i can say is WTF

I hope they found the sick calf and the sick man who also needs help.

FIND THE CALF BEFORE ITS TO LATE! HE IS SUFFERING AND IN PAIN!

OMGoodness please find the sick calf and rescue it!!!

Thank goodness the alligator is being helped. But the poor calf, being dragged around at the mercy of this obviously disturbed individual, like an object, when he or she will be craving their mother and herd. He obviously stole it. Where animal abuse is concerned, officers should have the power to act IMMEDIATELY. The calf was sick, the alligator was there illegally. Leaving the guy there with them until the next day was ridiculous. Laws need to change to stop the suffering of those beings who cannot escape horror and don’t have a voice. We are their voice and more needs to be done. They should have taken the guy in for questioning and had the animals taken immediately for help.The baby was sick… Unbelievably they just left this poor creature, desperate for help, to suffer in an extraordinary situation that could have and should have been dealt with as a matter or urgency.