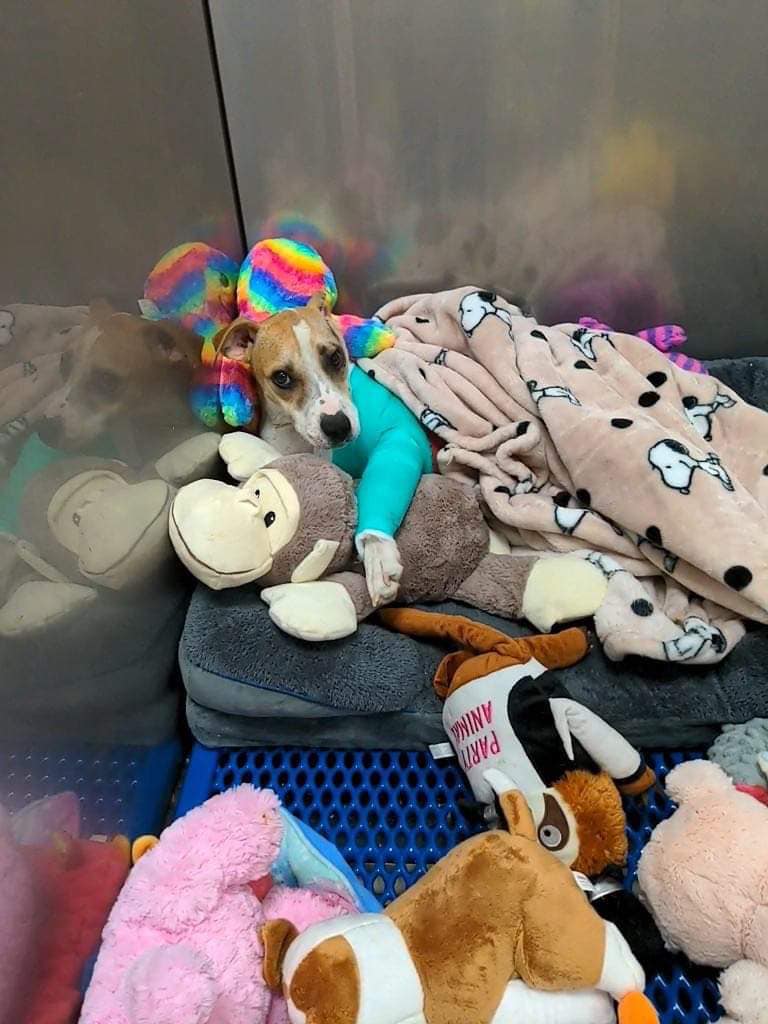 Memphis, TN – Riona, the dog who was doused in accelerant and set on fire in the Nutbush area in June, is continuing on her road to recovery from widespread burns. This week, she underwent an important surgical procedure to help her recuperate from the fourth-degree burns covering most of the left side of her body.

On Thursday, Riona had saline packets placed beneath the healthy portion of her skin. These packets will be slowly filled to expand the skin. The new portions of skin will then be used to cover the portions of Riona’s body that lost skin from the deep burns. Tails of Hope Dog Rescue, the organization that took Riona under its wing, let Facebook followers know that Riona’s surgery on Thursday went well.

As Riona continues to heal, she is being showered with love. Ginger Natoli, the rescue group’s founder, tells the Commercial Appeal:

“She’s getting lots and lots of attention from everywhere. She’s had gifts and toys come in from literally all over the world.”

Adding perhaps the most inspiring statement that anyone could hope for:

“Probably one of the worst things in the world that could’ve happened to a dog happened to her, and she’s forgetting. She’s happy.”

Quishon Brown, the man believed to have burned Riona, was arrested by the Memphis Police on July 12. His original $5,000 bond was revoked when he broke the conditions of the bond and Judge Louis Montesi then increased the bond to $150,000 after a recorded phone call, between a woman at his home and Brown, was played in General Sessions Court. On the recorded call, Brown said, “You can shoot people when they come on your property. You can shoot the reporter. Wait til I get out. I’m going to shoot them, and I’m going to tell them I’m going to shoot them.” Brown had two other dogs in his possession when he was arrested and they have been seized. With the help of Tails of Hope Dog Rescue, one dog is in a new home and the other is in a foster home.

Animal Victory is petitioning for Brown to receive the maximum punishment for all charges stemming from this appalling case of animal cruelty. You can learn more, and add your name, at this link to the petition.

He should NEVER be freed. He is a threat to humanity and animals. I think he should be locked in a mental institution for the rest of his miserable life.