Days ago, deputies with Colorado’s Arapahoe County Sheriff’s Office entered a burning RV to save dogs who were trapped inside. On Wednesday, the sheriff’s office wrote:

Sheriff deputies pulled two dogs from a fire overnight in a harrowing rescue attempt captured on body-worn camera video. The dogs had inhaled a lot of smoke and had a hard time breathing. Both dogs were unconscious.

A link to the dramatic body-cam video was shared with the public. At the beginning of the footage, the trapped dogs can be heard screaming from the RV’s interior. Shortly thereafter, the dogs fall silent as the deputies desperately try to coax them out.

One dog was able to run out of the RV, but the others were overcome by the thick smoke and had to be carried to fresh air. In the footage, a deputy can be seen administering CPR and trying to rouse an unconscious dog. 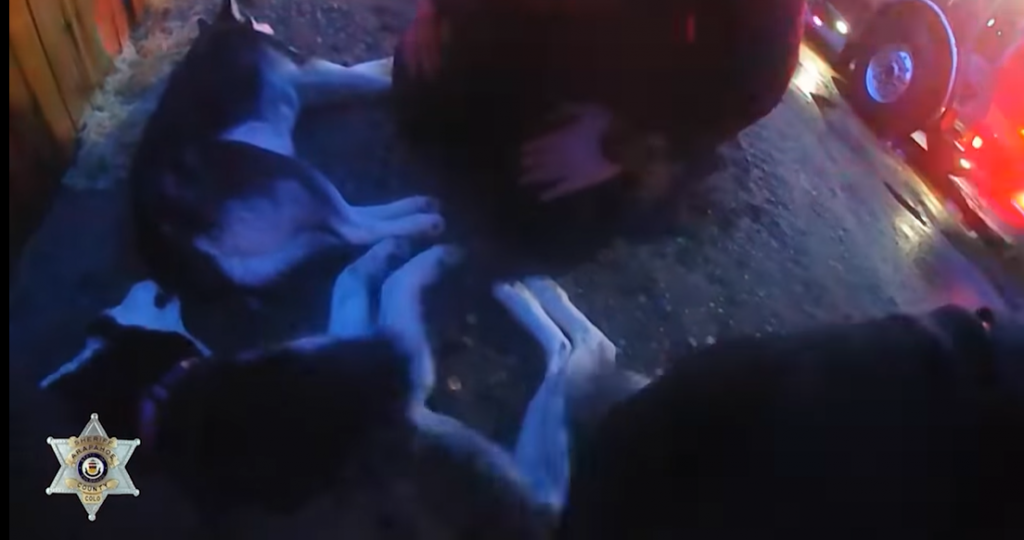 Transporting animals in an ambulance is not the norm, but an exception was made. The authorities write:

Sable Altura Fire Rescue arrived on scene, gave the dogs oxygen and paramedics transported them to VCA Alameda East Veterinary Hospital in the ambulance. The Sable-Altura Fire Chief says they’ve never transported animals before, but had to in order to save them.

The dogs were literally saved in the nick of time – had the deputies arrived even a minute later, the outcome would have likely been much different. Great work to everyone involved!

Those deputies are true HEROS, God bless the boys in blue

Wow thanks to amazing officer’s that saved them.

The dogs surely would have died if not for the deputies. I like how they talked to the dogs as well and treated them like beings who matter. Now the Arapahoe ambulance people have a story and a good one it is. They helped save lives and is that not what they do whether human or nonhuman? Great work done by all.

wonderful outcome for the dogs….. as for the ambulance taking the dogs to the vet emergency hospital, it should always be a no questions asked thing to do……they needed to get to hospital fast… just like people…so ambulance was the way to go…. GOOD JOB to all that saved those dogs…..

I watched the video of you guys risking your life to save the dogs and actually cried because of your bravery ….beautiful ending