Calaveras, CA – A curious bear broke into a woman’s SUV and proceeded to completely trash the vehicle’s interior before escaping nearly seven hours later. The strange incident took place earlier this month when 49-year-old Vicky Costantini was at a vacation home, celebrating a bachelorette weekend with friends.

Costantini believes that the bear accessed the inside of her Range Rover through an unlocked passenger door, and then got stuck when the door closed. Nobody knew that the bear was in the SUV until early September 12, when the car’s alarm system started going off.  She told KTVU News, “There were lots of lights going off, the hazards were on. The car was honking.”

The windows of the SUV were so foggy that nobody could see what was inside…using a FOB to unlock the hatch, the intruder was released from afar and quickly ran away, leaving a trashed vehicle interior in his wake. 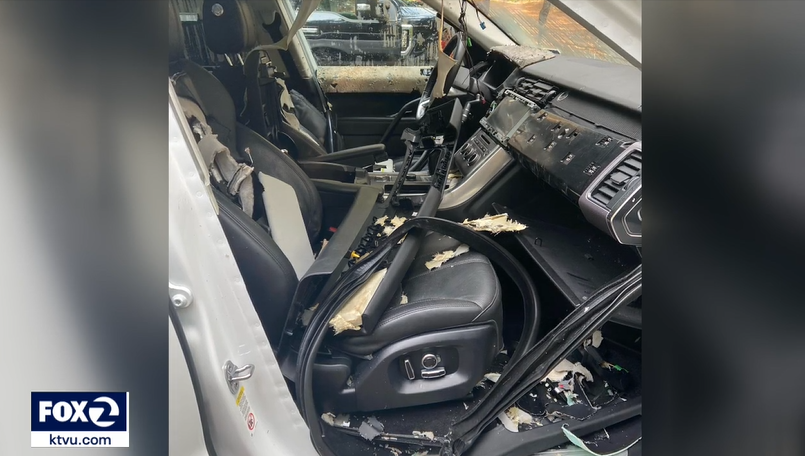 The vehicle was destroyed, but nobody was hurt. Costantini plans to keep all of her doors locked in the future…and park in a garage whenever she can.

Watch a video of the bear jumping out of the SUV below.

Poor bear! All he wanted was out of that prison he found himself in.

She undoubted had some easily-smelled food in the car that attracted the bear. An SUV is not a bear-proof trash can! I once saw a photo of a VW in Zimbabwe that had been speared and lifted off the ground by elephant’s tusks, who was trying to shake the bananas out of it while the owners were inside having lunch.

I am so glad this precious bear is safe now……