Medina Spirit, the 2021 Kentucky Derby winner, collapsed and died on Monday morning after completing a workout at the Santa Anita Park racetrack in California. The three-year-old colt’s shocking death is believed to be the result of a heart attack, though a necropsy by the University of California, Davis, will be completed to determine the racehorse’s exact cause of death.

In a statement, Santa Anita Park recounted the morning tragedy:

“Following the completion of a routine morning workout, Medina Spirit collapsed on the track at Santa Anita Park and died suddenly of a probable cardiac event according to the on site veterinary team who attended to him.”

Medina Spirit’s Kentucky Derby win was marred by controversy when post-race testing revealed that the horse tested positive for betamethasone – an anti-inflammatory steroid that is banned during the 14 days leading up to the race. 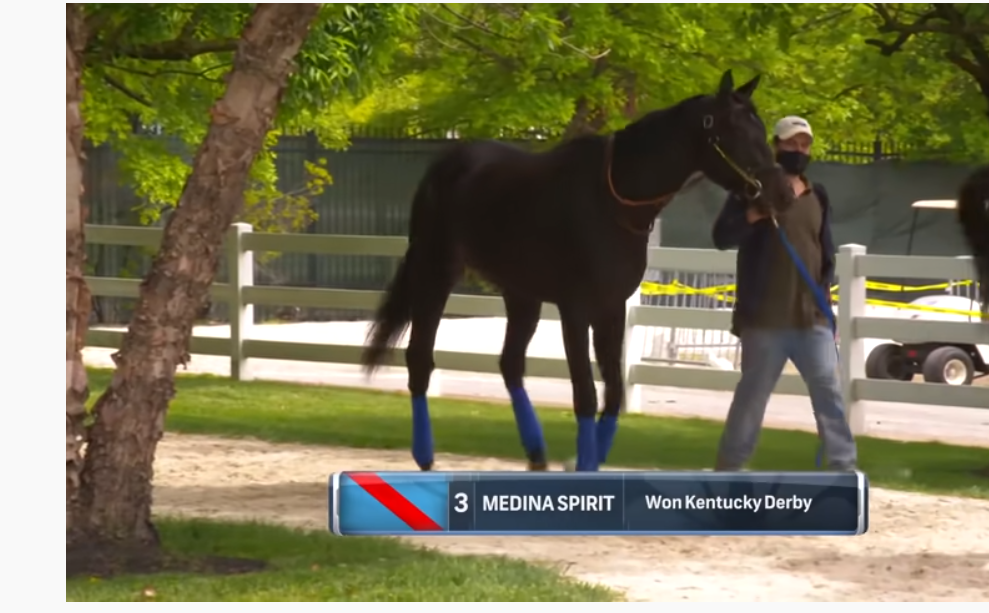 His trainer, Bob Baffert, claims that the positive result came from a topical ointment that had been applied to Medina Spirit for a skin condition.

On Monday, Baffert commented on the shocking death of the champion horse:

“My entire barn is devastated by this news. Medina Spirit was a great champion, a member of our family who was loved by all, and we are deeply mourning his loss. I will always cherish the proud and personal memories of Medina Spirit and his tremendous spirit.”

Agreed. Shut them down. They don’t give a damn about the horses. It’s all about the money.

HORSE RACING IS EVIL!!! BAN ALL HORSERACING!!!!! Depraved Bastards that have anything to do with Horseracing! The Horses are SO ABUSED!!!

Agreed. They don’t give a damn about the horses. They drug them and when the horses can no longer race and breed who knows what happens to them? Horrible.

Ban horse racing all together and PROSECUTE, FINE and PUT IN JAIL those who are involved in the slightest!!!! This is pure deranged, mean and sick!

the scummy trainer probably worked the effing horse to death

The horse isn’t the ‘effing” one

I agree. They horses are drugged. They hit them to make them race faster. It’s as bad as bullfighting. Sickens me and we are supposed to be a humane society. Ban horse and dog racing.

The owner is no damn good either. Baffert is a real bastard.

Of COURSE it would be a banned substance. Those disgusting owners, trainers, etc ONLY care about $$$.
I hate horse & dog racing MAJORLY!!!

I couldn’t agree more Ban dog and horse racing. I also don’t like the dressage or whatever it’s called to make the horses prance during a horse show. The hoofs are cut to make them prance. Cruel and unnecessary.

The worst abuse is to Tennessee Walking horses – they naturally have a high-stepping gait, but some owners use heavy weights, chains and acid so that they are in such pain they step even higher. This is called “Big Lick.” Big SICK is more like it. And it is a real bitch to get this declared illegal, can you believe it?

Utterly vile and they make horse & rider look ridiculous. Ridiculing the idiot sitting up there is fine but laughing at the poor horse is obscene.

So far…I totally AGREE with every other comment displayed on here right now. I believe this horse along with MANY other racehorse’s were DRUGGED. Usually done by the owner of the horse, to COLLECT the enormous $ Insurance $ taken out on the horse’s. Or the owner pays someone else to poison the horse. This is a BRUTAL $$ BUSINE$$. They care ONLY about the MONEY. “NOT THE HORSES.” Like so many other CRUEL to animals for pay schemes, Horse racing “MUST BE ABOLISHED.!!!!!”

Indeed, I couldn’t agree more. We need to get PETA, ASPCA and the Humane Society of the US involved in these travesties.

PETA and the Humane Society are for reform, NOT ENDING RACING. This “business” cannot be reformed – it needs to be banned. ASPCA and Humane Society frankly do NOTHING for animals, though they do pay their CEOs huge salaries and have a very hefty retirement funds; funds for animals, not so much. There are much better organizations working to help animals today – do some research into this.

YOU do not know what you are talking about. PETA wants to BAN ALL HORSE RACING and any other sport that abuses animals such as cockfighting, dogfighting, the iditarod in Alaska to name just a few. Peta is animal rights not animal welfare. YOU DO YOUR RESEARCH, doubt you know the difference between the two. Furthermore, claiming that these CEO’s get paid huge salaries is a lie. If it weren’t for these organizations life on earth for most animals would even be more intolerable than what it is now. its precisely because of HSUS, THE ASPCA AND PETA that the lives of thousands of animals have been saved or their lives made better, they are the ones who have awakened the consciousness of millions of humans that animals are NOT possessions but living breathing sentient beings worthy of compassion and respect. Animals endure indescribable acts of violence and they cannot ask for help, so we need to be their voice.

You may be correct but you are also rude! Tolerance…..Peace.

Wicked it’s all about the money !!

Sports and competitions involving animals must stop. If humans want to subject themselves to competition, then they should do it themselves. Let people wager on human runners racing around a track. Then, at least the humans can have a voice in what is too extreme. Animals in competitive sports of all kinds needs to be shut down. Now.

“The California Equine Medication Rule permits the use of non-steroidal anti-inflammatory drugs for the therapeutic treatment of equine illness or injury. Permitted NSAIDs include: diclofenac acid, firocoxib, phenylbutazone, flunixin, ketoprofen, meclofenamic acid and naproxen.” Who knows if Medina was given one of these and it proved to have side effects that killed him! This is Baffert’s horse we know, but we won’t know what killed Medina until the results of the necropsy are made public.

My point exactly. We don’t know what the owners and trainers are shooting into these beautiful creatures. What happens to the horses when their racing career is over and they aren’t used for breeding anymore? They probably euthanize them.

Horse racing needs to be stopped. There are way too many deaths of these magnificent creatures. The love of money is the root of all evil and we know it is done for the money. If the horse does not die while being trained (many being pushed to their limits) or during a race, in most cases, the horses are disposed of if they do not perform well enough or no longer able to. The same in greyhound racing. STOP the unnecessary deaths! The love of money is proven when the owners, trainers, etc. will pump a horse with drugs just to improve their performance.

I read that the trainer, Bob Baffert, has had 75 horses die in his care in the past 20 yrs. What person would allow this man to take care of their horses unless they wanted to get rid of the horses for the insurance? This is disgusting that Baffert is still allowed to even be near a horse.

So very sad. Horses should not be forced drugs or abused for humans.

Baffert couldn’t care less about any of his horses. He is only one of MANY bad owners , trainers and others in a completely corrupt industry that cannot be fixed. Horses are shot full of drugs, whipped and trained far too young. They are bought and sold and many of them end up sold to slaughterhouses. Their lives may look pampered but every day is abuse and misery, all so uncaring people can profit off of them – if not off of their lives, then certainly off of their deaths. ALL HORSE RACING NEEDS TO BE STOPPED.

PLEASE PEOPLE – if you want to help end horseracing, look into an organization called “Horseracing Wrongs. EXCELLENT group of people educating the public about the cruel realities of racing and working hard to end it.
horseracingwrongs.org

Three year olds aren’t really physically ready to be raced like this. And the owner is a liar. He drugged that horse. End horse racing now.

Horse racing….another human entertainment at animals expenses. All Bob misses is the $$$!!! There are other ointments without Betamethasone, and knowing this, an honest individual (or vet), wouldn’t have risked that so close to race time. So clearly HE LIES!!! These types of trash care NOTHING about the horses. Only the CASH-COW (Pun intended) that they provide winning, AND at all costs!!! My holidays wishes are for all involved, to have a massive M.I. and suffer ever more, than Medina Spirit. May the horses run free, and spread that cheer!!!!💔 🐎

It doesn’t surprise me. Santa Anita is infamous for horse deaths. Check it out – dozens every year. Disgusting, despicable and depressing.